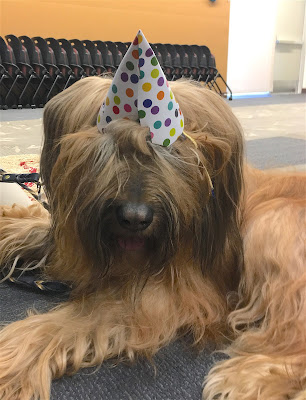 Pictures of Chou Chou's 4th birthday party are in her new ebook, Who Will Come To My Party?

Her 6th birthday party, April 7,  was also in a library on a Read To A Dog day. But this party turned out to be a little wilder - a Cat In The Hat kind of party!


See more of the fun:


There were 4 dogs this year, 4 pawrents/handlers for our dogs, the librarian, and a mother and 2 children I invited from our neighborhood. This was a new day of the month for this library shift and it may take a little while for more children to find us. But we had a perfect party nonetheless. 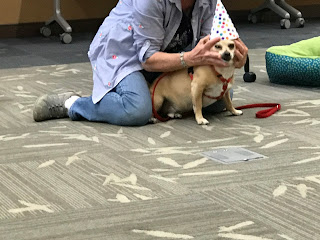 I brought hats, not sure whether they would be for the children or the dogs. The children wore the hats happily; the dogs were reluctant. 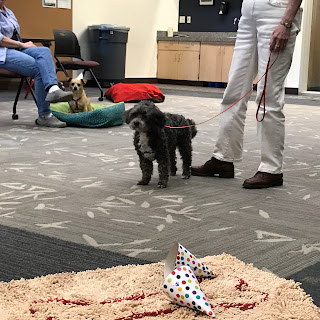 ("We hated the hats! We struggled to get them off, but as soon as we did, the pawrents put them right back on! After a while, I just gave up. So sad.") 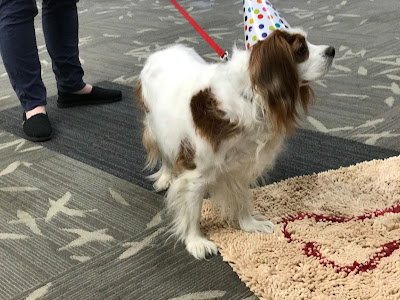 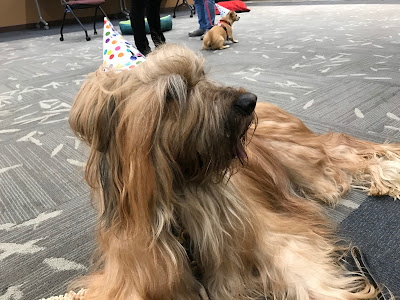 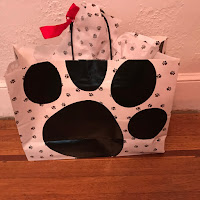 The day before Chou Chou's birthday, her Lucky Buddy dog walking friends came with a gift. Such a cute package. What could it be? It was a birthday cake for dogs. I brought it to the library so the dogs could share. I also brought cookies for the dogs and iced animal crackers for the children ("The parents ate them!")


The children came with their own gifts for Chou Chou.
They painted beautiful pictures of her. 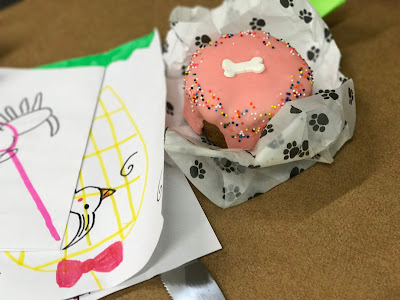 I brought a knife and some little paper plates
to cut the dog cake and serve it to the 4 pups.
("Melinda didn't want to wait!") 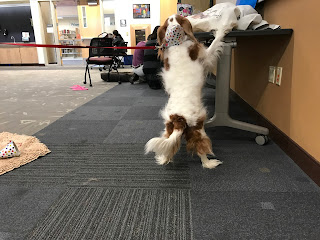 The kids had other ideas.
Instead of cutting a piece for each dog,
they put the entire cake on the floor.
But first, the birthday song. 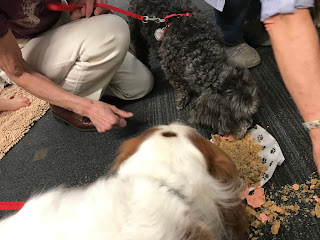 And like wolves, the dogs dived in! What a mess! But where is Chou Chou?

Was she being generous and letting her guests eat first? Where is Chou Chou?

("Look behind your chair!")

Chou Chou was behind my chair. But it was not out of generosity and politeness, waiting her turn. ("Ha!")  Actually, she had gotten to the cake first, removed the entire top with the icing, and took it behind the chair to eat where no one else could get it. ("I am a smart and hungry puppy! And besides, it's my birthday cake!")

It was time to go home. But look at the mess we made! We couldn't leave the library that way or we would never be allowed back in! No worries. I anticipated this. I brought a hand-held vacuum and swept up all the crumbs, every last one.

I was the Cat In The Hat, making a big mess and cleaning, without a trace, before the adults came back. When we left, the library looked as clean as ever.

That was quite a party. Happy Birthday, Chou Chou! 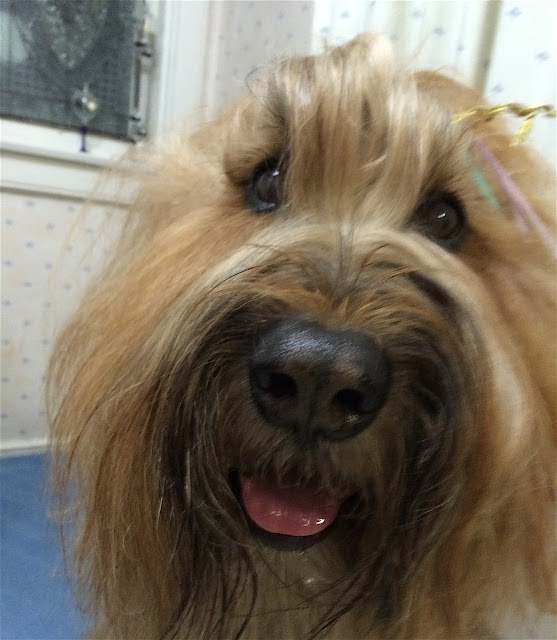