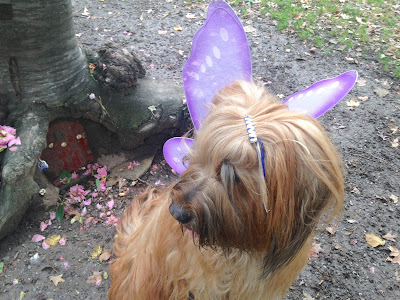 Chou Chou Briard had a busy day today. It started with a run around the park with her dog walker. Chou ran in her fairy wings, and found a fairy door in a tree. 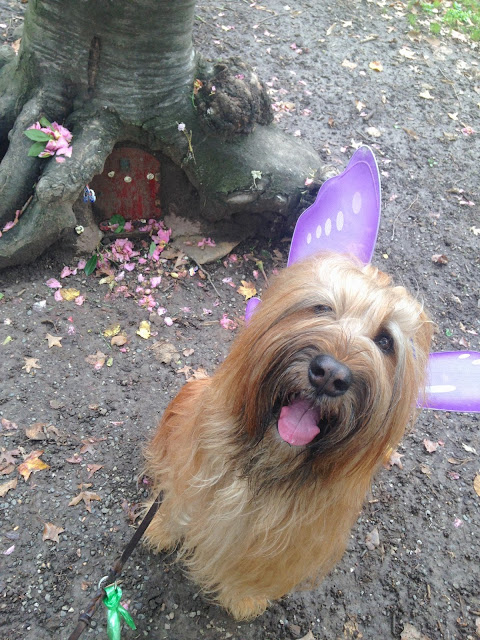 The dog walker took the fairy photos. She's one of Chou Chou's favorite people. In the spirit of Halloween, Chou Chou gave her dog, Roaman, a treat: some frozen yogurt. 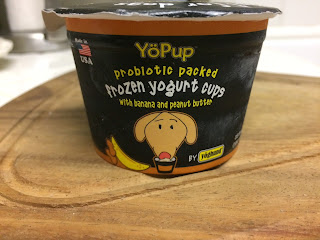 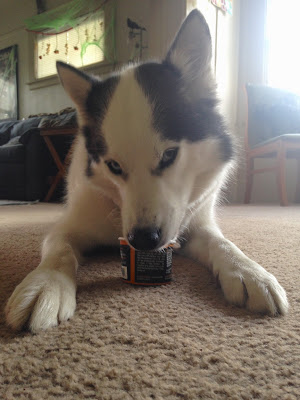 
I went to my next stop. I had some clothing alterations to get done. Kim has a little dog who comes to work with her. Tinsel and Chou Chou took a Tricks class together years ago. But Tinsel is afraid of big dogs, so I left Chou Chou home. 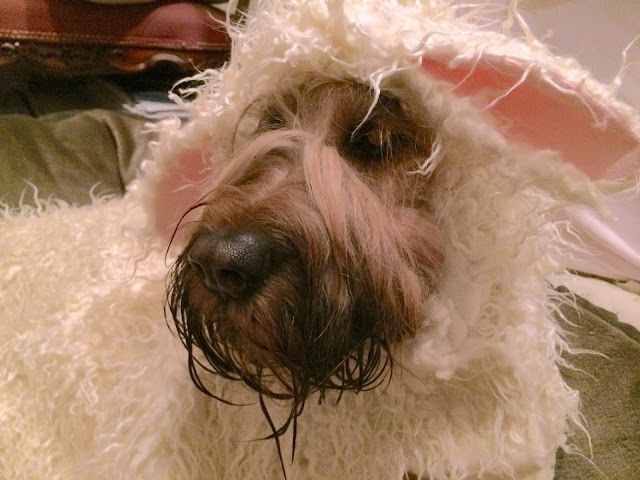 ("Look! I am a sheepdog! But I couldn't run in my sheep costume, so this morning I used my wings instead! I could run fast with my wings!") 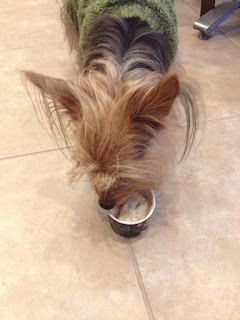 I brought a frozen yogurt treat for Tinsel; Kim put it in the freezer so he could eat it later. ("Are you sure there are some left for me, your good little puppy?")

When I got home it was bath time. Chou Chou has a therapy dog library visit tomorrow and she has to be clean and brushed for the children to read to her.

As it got dark, and unfortunately rainy, we gave out candy to the children who came for Halloween trick or treating. Whenever the doorbell rang, Chou Chou barked, and that started Brandy cockatoo yelling. ("That yelling hurts my ears sometimes!") It was a noisy evening.

There was one more thing to do. After the children stopped coming, Chou Chou got in the car and we went to see her BBF, Toffee. We had some frozen yogurt to give him ("He loves food!"), and this time I had one for Chou Chou, too. 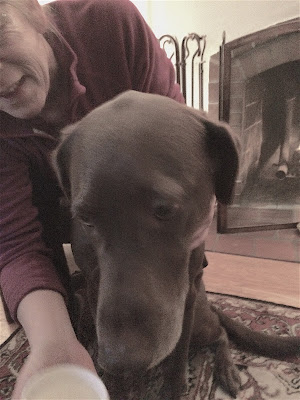 She was so excited when I stopped the car and she saw where we were. She hasn't seen Toffee in a long time ("He doesn't like me anymore! I scare him when I am bouncy and playful. We used to play and wrestle together... never mind...  so sad!")

I gave Toffee's treat to Mary and settled Chou Chou to eat hers. She forgot about Toffee and dove into the yogurt. ("That treat was very very tasty!)

Toffee wouldn't eat his yogurt treat. He went to hide behind Mary. ("I was being such a good puppy! I was not bouncing or herding him! I was politely eating my yogurt treat! It's not my fault!")

I was watching Toffee to see if he'd come out of hiding and eat the yogurt. I was focused on Mary while Chou lapped up her yogurt. When I glanced at my pup, I realized the yogurt cup was gone.

Did she eat it? I pried open her mouth to look; she did not want to open her mouth. ("Of course! You wanted to take away the tasty cup!") 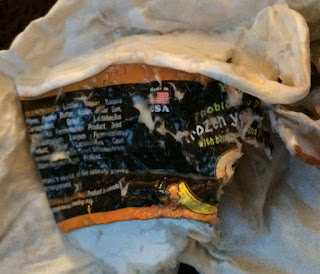 Sure enough, the cup was crushed up in her mouth and she was not making it easy for me to take it. ("And that surprises you?") I pulled it out, and it looks like she didn't swallow much of it, if any. ("I was still working on it.")

("Time to go home and eat dinner!
I ate my dessert first, but I still want my dinner!
Happy Halloween!")