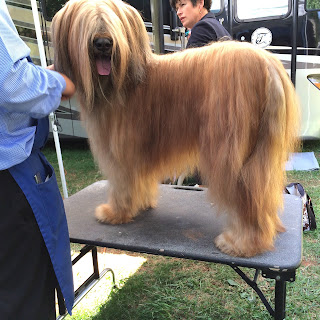 This was Chou Chou's first show in more than a year. I am not trying to earn her championship; I just go for fun and because it's good socialization for her.

This is the first time she has entered the Grass Valley show, although she attended once before.

But first, there was preparation! Her nails were trimmed and she had a special bath. The handler wanted me to use Pantene, instead of the fancy dog conditioners, and let it sit on her coat for 10 minutes. It's thick. I glopped it on her coat and we hung out in the bathtub until it was time to wash off. I was almost as wet as she was. 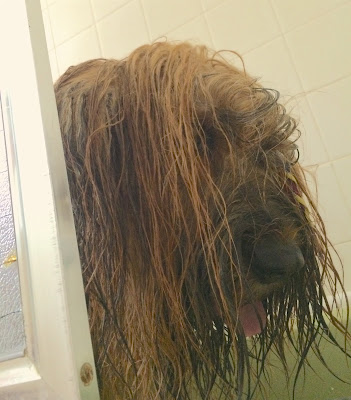 At night, I brushed and combed her. The handler would fluff her and trim around her paws the next day.

The show was a little more than an hour from my home -- although I was warned about heavy traffic because of Labor Day weekend -- and it's a pretty drive through the woods. We were meeting the handler there and she wanted us early, so she would have time to do the finishing grooming... 9 am.  To get there at 9, allowing for traffic, I had to wake up at 6 am. That's basically the middle of the night for me. But I did it.

The fairgrounds were easy to find, but the actual show was not. I entered at Gate 4 and found myself in the woods. Lots of trees and cars parked around them, but no sign of a dog show field. Not at all what I remembered from 3 years ago. I drove around through the trees, hoping to spot the gate to the show, but I couldn't find it.

There were people with dogs... I parked the car and asked them where the show was being held. "Right there," the woman said, pointing. Through the trees and behind a wire fence, not far from my car, there were dog show rings. A wire fence, not a gate to enter.

I spotted a hole in the fence, and Chou Chou and I walked through. Chou Chou was excited and pulled me forward. I had to tell the handler where I was, so that she could come get us and walk us to her grooming area. But I didn't know where I was. Chou dragged me over to a table and I asked them how I could describe my location.

The woman behind the table said it was the Canine Good Citizen test area. Oops! I was planning to enroll Chou Chou in the CGC Advanced title test, and here she was, making a very bad first impression. I decided it was probably not worth trying.

I called the handler (what did lost people do before cell phones were invented?) and she came to get us. Chou is exuberant and loves people; she ran up to the handler, dragging me along. The handler grabbed the leash from my hand. "You're being bratty!" she told Chou as she yanked the leash. Chou fell in line and we took a fast walk to the grooming area. 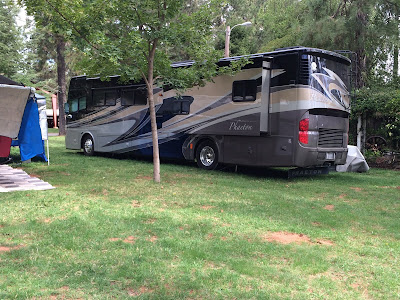 Jean had a very large RV. She was travelling with her husband Josh (also a handler),  19 show dogs, several grooming assistants, a barbecue grill, at least one bicycle, and who knows what else. They go all over the United States to dog shows, living in the RV at times. 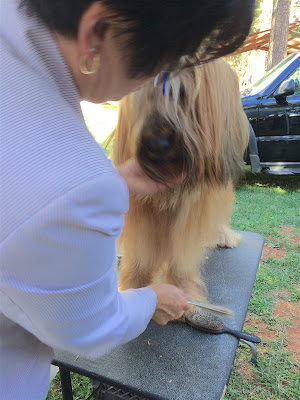 It was time to get those paws trimmed. Hair trimming is an art.  There is a lot of activity at a handler's station. Each dog is on a tight schedule, groomed and rushed to its ring on time with its handler. To me, it looked stressful. But many dog handlers have grown up in the business, with parents who were dog breeders or handlers, and they have done this from a young age.

Chou Chou was now ready to wait. Her ring time was 12:45 pm, and there were a lot of dogs that Jean was showing before Chou. Much of what takes place at dog shows is waiting. She sat in a pen near the handlers and other dogs, and I went  for a walk. 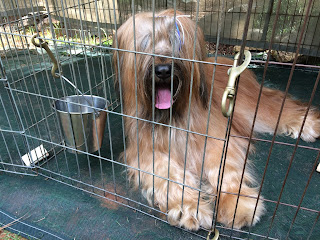 First thing I did was go back to the Canine Good Citizen table and enroll for the Advanced test. I believed I was wasting $15, but there was nothing else to lose. How could Chou Chou pass a test with other dogs surrounding her, without yanking me around or barking at the other dogs? Even in her library work, her entrance was always "dramatic." I filled out the paperwork anyway. 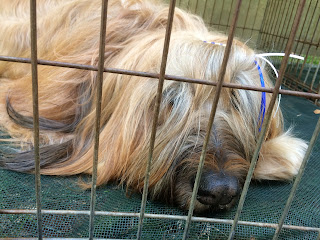 I went back to sit in the grooming area. Chou Chou was bored, but relaxed, even though there was a whining dog next to her and 4 hyper Tibetan Terriers jumping around in a nearby pen. I took her out and we walked around the show. Odd... she was not pulling me.

It was show time. I have to stand far from the ring, usually behind a tree, so Chou doesn't see me. She has to focus on her handler, the judge, and her task. There was another Briard registered for both days, but he didn't show up. Chou Chou was the only Briard out of 1168 entries. 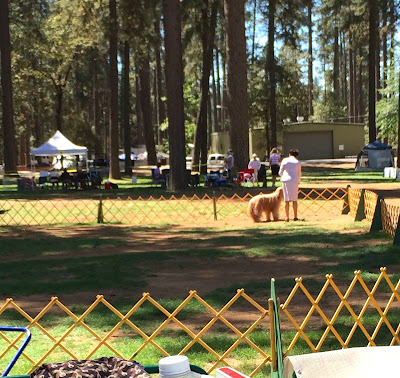 Stand, up and back, around in a circle, stand. Ring time is short. She came out with 3 ribbons.

Then, more waiting around with the other dogs at the handler's station, until it was 2 pm -- time for the Advanced Canine Good Citizen test. She would be taking the test with 6 other dogs. We walked back to the CGC testing area. Immediately she barked at a Bouvier. I thought about leaving right then and there and not taking the test at all. She couldn't pass it. But, I stayed and tried.

There were 10 tasks she had to pass. The first was sitting in close proximity to the 6 other dogs, quietly, for 3 minutes. Chou Chou is not able to do this in the library. She gets up and pulls to the other dogs to play. I sit her far from the others; when the children come in, she focuses and is fine.

I pulled up a chair next to a Golden Retriever and sat. And Chou Chou sat, quietly, without interfering with the other dogs, for 3 minutes. She passed that task! How did she do that?

We continued. We stood in a line with the other dogs and one by one, the dogs performed the other 9 tasks with distractions. And for each task, Chou focused and did what I asked. She passed all 10. She passed the exam!

She had earned a ribbon and a new title after her name: Advanced Canine Good Citizen (CGCA), also called Community Canine. How did she do it?

And so it went at the dog show. Perfect behavior. The handler had changed my wild pup into a model show dog. ("I did not like being called bratty! And I did not like low expectations for my exam!  I would show you all what I can do!")

Such a good dog deserved a special reward! I bought a cup of peach ice cream for myself, but I gave Chou a spoonful at the end. ("So tasty! I am in love with this pinkish snow! I will be perfectly behaved from now on and get more of this treat!")

Chou went into the ring once more, for Herding Group. She would compete against 19 other dogs, all winners of their breed. She did not win. But she showed beautifully.

Then it was time to go home. I wnt back to the CGC station, found the hole in the fence, and found my car. We were both exhausted. We went to bed early, knowing that we had to get up early and do it all again a second day.