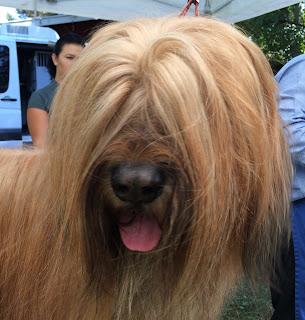 Day Two of the Grass Valley Dog Show -- 1168 dogs and only one Briard. Just walking around the show was fun; Chou Chou got a lot of attention.

("Will somebody tell me why they took away my hair clip? I can't see anything!")

While walking with Chou's handler, Jean, we were stopped by a woman who thought she had it figured out:

This time, Josh handled Chou Chou in the ring. Josh ran with her, so she could show the judge her beautiful stride. ("I work very hard for that! I go to physical therapy every week, to overcome my hip dysplasia and run pretty!") 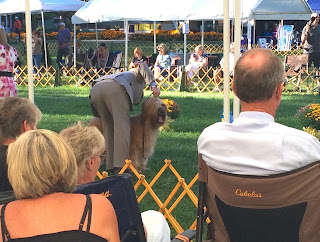 When I took this photo, I was a little too close. Luckily she didn't see me. Then I went back behind my pole, with the others. All the owners, hiding behind trees, so their dogs stay focused on their handlers. These photos of people sitting and watching ringside are not the dogs' owners.

Judge Trotter checked her teeth, and then her feet, to make sure Chou Chou had all 6 dewclaws. The judge remarked that one of her nails needed trimming. It's not counted against her; it was just an observation by the judge. Still, good thing I had her nails trimmed four days ago, or they would all have been too long. ("The lady with the clipper missed one! I told her, but no one listens to dogs! So annoying!") 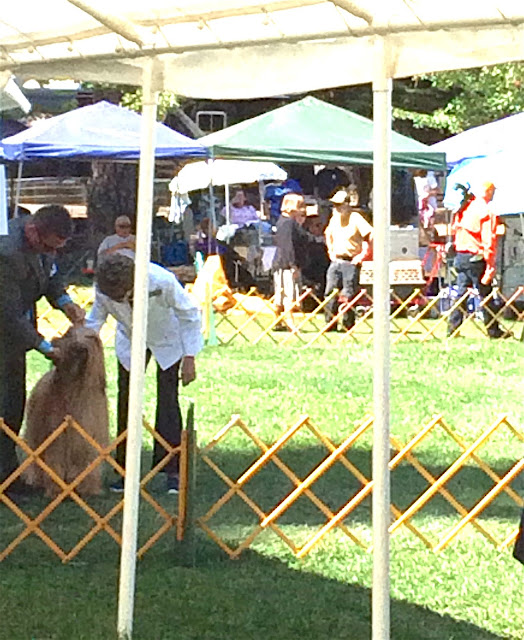 So, 3 new ribbons for Chou Chou. Then we went to the ice cream stand. I ordered peach ice cream in a cup again, and as I did the day before, I intended to give Chou a little bit on the spoon when I was finished with it. But she had learned the day before that she loved it, and she didn't wait for me to offer it. ("I am a smart puppy!") She lunged at it and got her face into the ice cream, knocking the cup out of my hand and onto the ground. So she had the ice cream today and I had none. ("I was going to share it, but you dropped it all! You should have bought another one, so we... you... could try again!")

One of the highlights of the day was stopping at the Nevada City Police Department's booth and learning about their new K9 Officer, Rüdiger, a German Shepherd  I told them that Briards have worked with police officers in France, as well as with the Frence soldiers during both World Wars. I gave them one of Chou's therapy dog trading cards.

One of the officers read the back of the card and noticed that Chou Chou's parents were both born in the Czech Republic. K9 Officer Rüdiger was born there, too. His name means, loosely translated from German, Top Warrior. He is partnered with Officer Michael "Scott" Goin.

It cost about $70,000 to acquire, train, and equip him. It will cost an additional $28,000 per year for his ongoing expenses.   K9 Officer Rüdiger is completely community funded, and he has a Facebook Fan Page where you can donate to his upkeep. 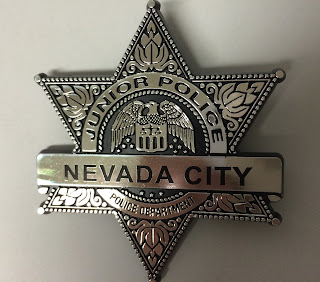 It was time to drive home, take care of the chores and go to sleep. It was a very long two days! I am looking at the schedule to plan Chou Chou's next show.

If you have an opportunity to visit a dog show and walk around, see all the different breeds, maybe watch some of the grooming, and visit the exhibitors' booths for unique dog products ("And eat some ice cream!"), you should give it a try.