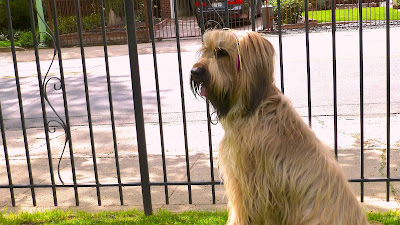 Chou Chou Briard is a herding dog. No sheep? No problem. She lives on a busy street near a park and lots of dogs walk by! And like any good herding dog, she tries to round them up.

This does not go over well with passersby with little dogs. Chou Chou runs across the length of the fence, barking, and it scares them. I don't blame the people for getting upset about that.

There is no backyard for her to play in. It's very small -  the size of a large patio - and all the bricks are uneven, pushed up by tree roots. So we play in the front yard.

One remedy is to keep her inside until it's late at night and no one is out walking. At midnight, you can find Chou Chou and me running around the yard. ("We play with my glow ball! So much fun when it rolls through the fence and into the street, and cars get scared of it! So much fun to see my parent go into the street and fetch it for me! And then I drop it so it rolls out again!") 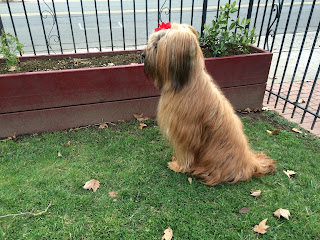 Three months ago, I decided to take action and solve the fence problem. I hired a landscaper to build a planter. It's 2 feet high ("Same as me!"). She can see over the planter for now, but those plants are going to grow!

And they are growing! 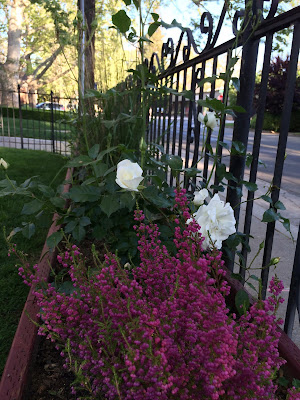 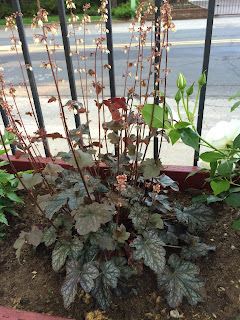 Chou Chou still tries to charge the fence. She jumps up on the planter to see better. ("But I am a good puppy! I put my paws between the flowers! I do not smush them!")

Short dogs that walk by can't see her at all now, and she doesn't bark at them. ("It's not too bad! I still play with my glow ball in the dark!")

And the planter stops the ball from rolling out of the yard into the street. ("Ha! I am a clever puppy! The side of the fence is still open, so I will take my ball over to the side and drop it!")