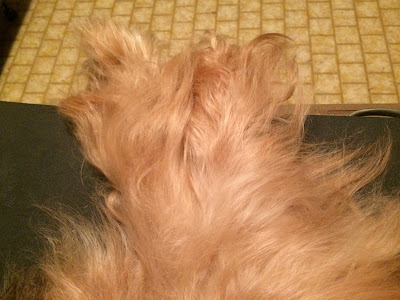 Chou Chou is up on her grooming table, lying quietly with her feet hanging off the edge, getting brushed. Don't her paws look cute and fluffy? This is after the gum was removed!

When I brush Chou Chou, especially after she's been in the park, I check her feet for burrs and pointed tree seeds between her pads. ("That is very ouchy!")  This time I found chewing gum, all over the bottom of one paw. It was stuck on the hair between her toes and on her pads. Yuck!

It's not just a yuck factor. Most gum contains Xylitol, a sugar substitute that is very toxic to dogs. Xylitol can cause a dangerous rise in insulin levels and lead to fatal liver damage. Symptoms may include weakness, loss of coordination, collapse, and seizures. If you suspect your dog has been licking or consuming Xylitol, take your furry friend to a vet ASAP.

Fortunately for me, Chou Chou showed no interest in licking it, which would have alerted me to check her paws immediately. I found it later that day during normal grooming.

I started by cutting off the hair with the gum between her toes.  I usually keep this trimmed anyway, but there was enough to let me cut it off. It smelled sweet. ("But YUCK!")

Next I used Dawn with water. That's what volunteers use to get oil off of wild bird feathers. It worked, but the pads still had a gum residue and were still sticky. Peanut butter, olive oil and coconut oil will also help remove it. You'll have to get off all the residue of the Xylitol-containing mess, for your dog's safety. I used diluted Goo Gone and it worked great.

This was a long and tedious task. If you have a dog that doesn't like his paws touched, this will be a real challenge! Fortunately, Chou just draped over the table and let me pull the hair between the toes to clip, soap, and goo the paw with the gum.

Always check your dog's paws when they come in from a walk, especially if you have a long-haired dog like Chou Chou Briard. ("Oui! Flower petals are okay! But we do not like sticks and seeds and sticky stuff in our hair!") 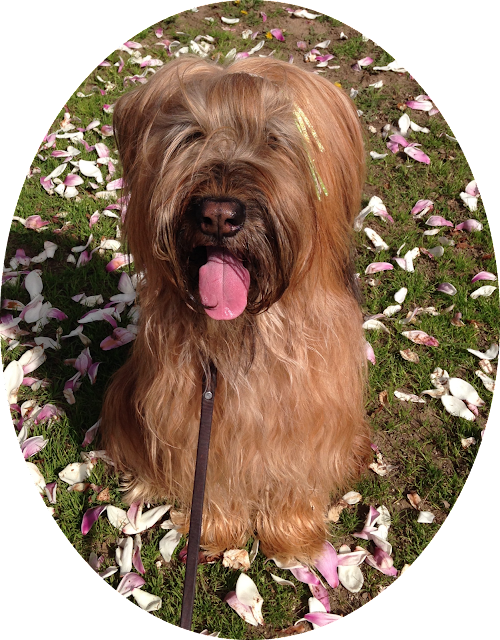