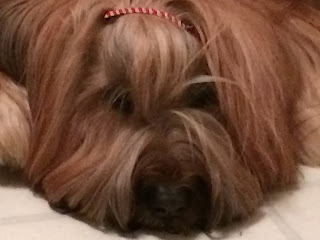 One night, Chou Chou couldn't sleep; she was panting, smacking her lips, and burping. She was clearly very uncomfortable. ("Oui! My tummy was ouchy!") And when Chou Chou can't sleep, I can't either!

So off to the vet we went. That was 4 weeks ago.

The vet started the diagnostics with stomach and chest x-rays. They were normal. We were sent home with some medications to soothe her stomach, and she was put on a bland diet of cottage cheese, rice, and chicken. ("Very tasty!")
Price tag: $412.

The gastric distress continued. Her stomach gurgled, and she was still burpy (which the vet said was regurgitation). After a few more days, and a few more sleepless nights, we returned to the vet. This time Chou Chou had a fecal test and blood work. All came out normal. That was all good news, except we still didn't know why she wasn't getting better. Price tag: $65.

Ten days passed without improvement. What do you do on New Year's Eve? I go to the vet. This time she had an ultrasound. It was normal. Price tag: $500.
("Happy New Year!") 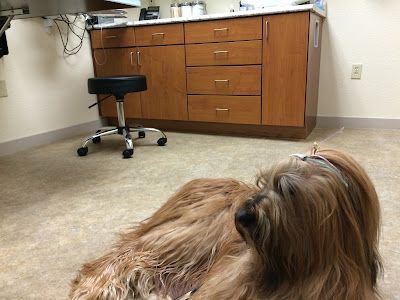 The drugs were changed a little. The Pepcid was changed to Prevacid and then to Zantac. The cottage cheese was removed from the diet. GasX was added. But she was not getting any better and it was almost a month of discomfort. I was really worried. I had not changed her food or her activities; I could think of nothing that could have caused this.

I scheduled an endoscopy. An internist would look down into her stomach and see if there was an obvious problem. Biopsies would also be taken.

This time at least they found something. Her stomach was very inflamed. And they pulled out... a hairball! I thought only cats get hairballs. They let me look at this hairball, the size of my thumbnail, and here's what I saw: it was coarse black hair, and Chou Chou has that kind of hair around her lips. I had noticed when I brushed her that the side of her beard looked sheared.

I had an hypothesis now: I've never given Chou Chou any rawhide. But recently I had purchased some Verbac rawhide that helps clean teeth. I thought this would be good a couple times a week, on days I didn't brush her teeth. Dogs chew rawhide with their back teeth, on the side of their mouths... right about where she was missing the black hair. The hairball was hard -- not a ball of hair, but something covered in hair. Could it be a piece of the rawhide, chewed and gooey, that mixed with the hair and stuck in her stomach?

The vet thought that was possible, but she didn't think the hairball was causing all the trouble. Anyway, it's out! Price tag: $1,700! 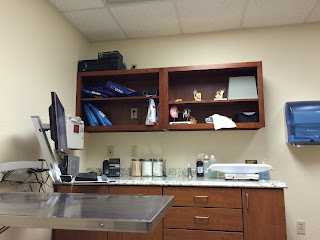 I was worried about Chou Chou. But I was not worried about all the money I was paying for vet bills. I have good pet insurance! ("I am a high maintenance puppy! But I am cute!")

She was put on flagyl and that has helped a lot. Little by little, I have changed her diet from the chicken and rice back to her kibble and she is improving every day. The biopsy was inconclusive as to cause of stomach inflammation; one possibility is Irritable Bowel Disorder, which would be very bad. It's an auto-immune disease that doesn't go away. I refuse to believe that. I like my hairball theory -- a stomach irritant that is now gone and she is healing.

Chou Chou is sleeping better now. And so am I.

Thanks for sharing. I should have my briars puppy in eight weeks or so. The litter was born two days ago. I am looking to learn all I can about this amazing breed.

How exciting! You should join our briard email group. Contact me for information:
contact.chouchou@gmail.com
Thanks for leaving a comment!