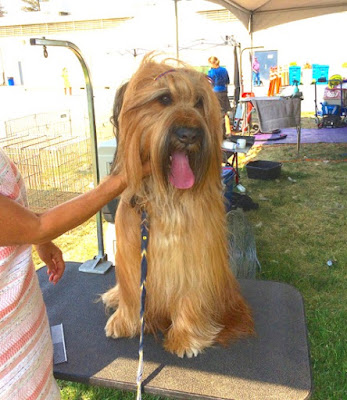 Chou Chou's handler was going to the Dixon, CA dog show and invited Chou to be part of it. So I entered her. Dixon is close to my home, so I could go for a few hours, go home, then go back the next day.

When people enter their dogs in shows, they don't know until later how many dogs of their breed are entered.

When the paperwork came in the mail, I saw that Chou Chou was the only female briard. This was not surprising, as there are few briards around here. But I was surprised that there was a second briard, a male.

I call this a self-esteem dog show: without competition, Chou Chou should win her class. Maybe she could even beat the male briard, depending on who he is. 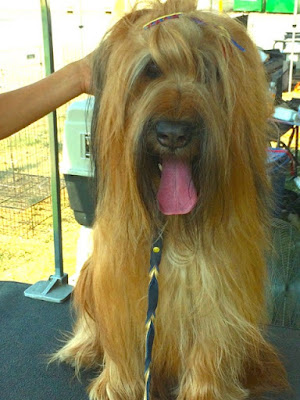 I knew where Dixon was but not where the fairgrounds are located, so I set the navigator on my new car. When we got to Dixon, the navigator lady sent me through numerous farmlands and then announced that I had arrived. Except that there was no fairground to be seen. I had arrived at an elementary school.

I checked the address I had entered and it was right. I tried finding the fairgrounds by myself, asking people for directions along the way. I was going forward, then backtracking and starting over. ("So ridiculous! You should have used your phone! Even a dog knows that!") There were so many people telling me, "You can't miss it." Yes, I could miss it. I was 45 minutes late to meet with the handler, and I was getting worried. ("Not me! I knew we'd either get there or not! But I get a car ride either way!")

We finally got there and parked. I started wandering around, looking for Keiko. But she saw me and showed me where she and her husband had their grooming station.

I washed Chou the night before. But it's the handler who does the special grooming, the fluffing. Keiko does a good job. And in the sunlight, Chou Chou glowed. 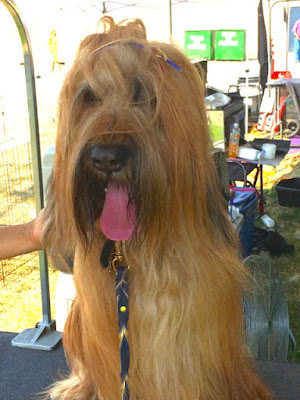 I left them at the grooming area and went to look for a hiding spot. I learned from past shows that if Chou Chou sees me when she's in the ring, she pulls towards me and ruins her run around the ring for the judge. So I have to be far away.


I found several bushes, trees, and walls to hide behind. This seemed like the one that gave me the best possibility of actually seeing her in the ring. 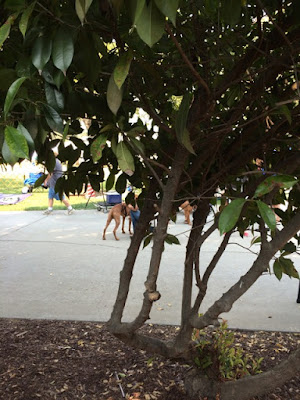 But, no. All I could see were feet walking by. And then, briard feet.

Across my path came the male briard. He strutted, with confidence. He seemed to be on his toes, a beautiful flowing movement. I was hoping the male briard would be a puppy; maybe Chou Chou could win against a puppy. But not against this dog.

When I saw the herding dogs leave the ring, I walked back to Keiko's station. Chou Chou looked beautiful. Keiko handed me the ribbons: she won First in her class, then Winners against all the other females (there weren't any), and then Best of Opposite Sex - the second place win against the male dog.

Ribbons are not automatic. Judges don't give ribbons, even if there is only one dog in the class, if they don't think that dog is worthy. So Chou Chou did earn her ribbons. 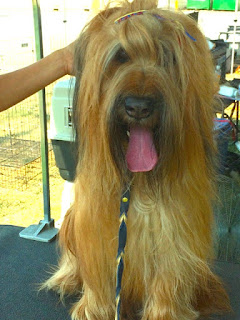 Keiko and her husband were really happy with Chou Chou's performance. She said that, compared to Ventura, Chou did so much better (I thought she did well in Ventura). And they told me that the male briard was not an ordinary dog: he was a Grand Champion.

At night, I looked on the Internet to learn more about him.

He had a long, nursery rhyme name. Like a "Little Jack Horner Sat in a Corner" name. Not that name, but like that. We'll call him Mr. Horner. And GCh Horner is the 4th ranked briard in the country! Chou Chou did not lose to an ordinary briard. How could my little Chou compete with that?

Then home to eat, another bath for Chou and a blow dry, then to bed early, resting up for the second day of the show.

Next day, Mary decided she'd come to watch, but not with Toffee. ("She didn't bring my BFF! So sad!"). And again, even with better directions, I still had trouble finding the fairgrounds. 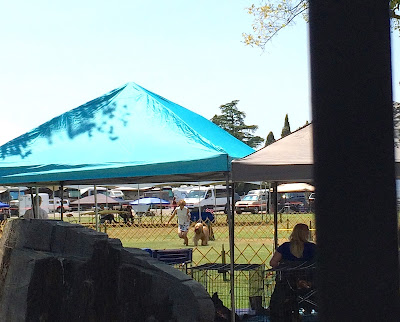 Chou Chou loves Mary. So Mary had to hide, too. I showed her my tree. We peeked out and saw a little of the ring today.

We saw GCh Horner in the Corner enter the ring. As he walks past the crowd, he swaggers. He’s got attitude. Keiko was emphatic that Chou Chou actually ran better than Mr Horner Corner. I don’t know; but I know from watching both of them run together that Chou Chou held her own and looked good.

She won the same three ribbons as the first day. I know people who throw away their dogs' ribbons. But I think they are beautiful. 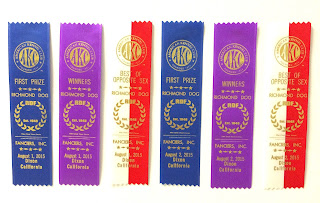 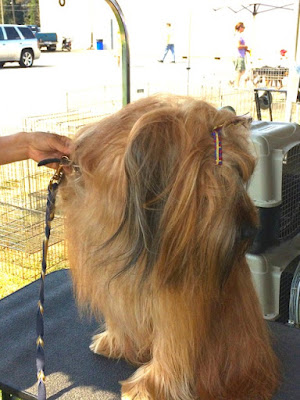 Hi Chou Chou
That sounded like a lot of fun! I think you are beautiful so I am not surprised that you got some ribbons. I recently entered a FUN dog show - the one in Niles, near Fremont. I did not win a thing. MAYBE if I hadn't had my head down scrounging for treats when I passed the judges table. . . but maybe not.
Pugs compared to poodles usually don't win.
Love Noodles

Hi Noodles!
It's easier to win when you are not competing against anybody. But don't tell - it's a secret.
xxoo
Chou