The last day of the show, I asked one of the briard friends if he would mind using my phone to take videos of Chou Chou in the ring. He was willing. So I gave him my phone and went back behind my tree.

One of the joys of going to dog shows is the shopping. The vendors offer almost anything imaginable with the picture of your breed on it. It's a wonderful place to buy leashes, too. 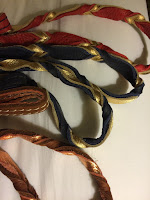 Every year or so, I replace her leather leashes, when they are worn and stretched too thin. The dog show leather leashes are softer than store-bought leashes. Some are braided, which is pretty and makes them twice as strong.

This year I found woven leather with gold. I couldn't decide which color to choose, so I bought 3 leashes! ("The red is just for my therapy dog work! I will be a très chic puppy in the library!")

This dog show was July 4th weekend. The motel was filled with dogs. On the 4th of July, I took Chou Chou outside, before her bedtime, for her last daily potty break. It was 10 pm and lots of dog owners had the same idea. I was trying to keep Chou at a distance from the other dogs, so they wouldn't get into trouble with each other. Where could we find a nice grassy potty spot that was vacant? Nowhere. Chou Chou was busy watching other dogs and wouldn't go potty. ("I was nervous! Wouldn't you be?")

So we were walking and walking, from one section of grass to the next, with Chou Chou sniffing trees, bushes, and garbage cans. But no potty. I was getting impatient.

And then the situation got worse: fireworks! Boom! Boom! All the dogs were scared. BOOM!! ("No, no! the booms didn't bother me!") Still walking from bush to bush, and still no potty. ("Just because you think I should go doesn't mean I have to go!") 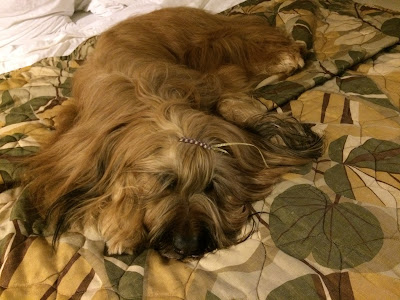 I finally gave up. We went inside, ("I won!") and we both quickly fell asleep.

On the last day, after hiding behind trees with other crazy dog owners, I went back to hang out with my briard friends again.


The day was misty and hazy, with cool temperatures --
much better than triple digit heat in Sacramento! 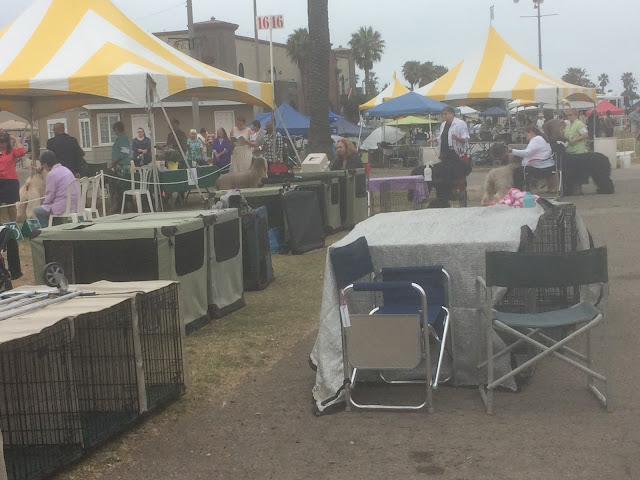 Then it was time to start my long drive home. For a holiday weekend, the traffic wasn't too bad. But the trip was 6.5 hours, I was exhausted, and Chou Chou went back to her new-car crouch.

No chores planned for Monday, so we could just sleep and relax.

After I got home, I looked at the phone video that my friend took of Chou Chou's ring performance. She did so well! She doesn't go to many shows like the other dogs; she hadn't been in a ring for 2 years. But she took third place. She stacked beautifully and, without moving at all, let the judge evaluate  her. She followed her handler around the ring in a beautiful run. ("Oui! Thank you, physical therapist!")

I'm so glad I have the video, because from my tree, I saw nothing.

("I did some peeking out, too!
And anyway, I can smell where you are!") 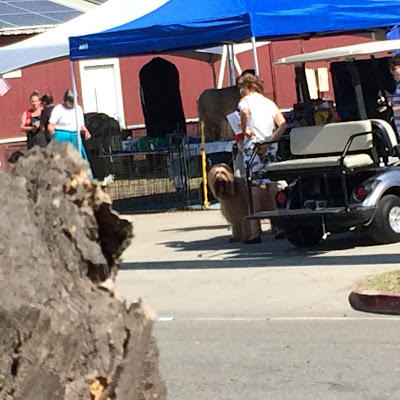