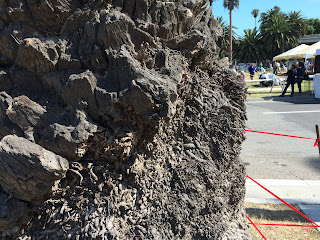 First day of the dog show. You might wonder why I am posting a picture of a tree trunk. This was my view of Chou Chou in the ring. I had to hide.
Many dogs, including Chou Chou, react when they spot their owners while they are being shown by the handler; when that happens, the dogs pull toward their owners, away from the judge and away from concentrating on their required movements. So I had barely a peek at the ring across the street from my tree.

Later, while talking with my friends near Ring 12, I saw a woman sitting in the passenger seat of a golf cart. I asked how long she had been waiting for the driver. She laughed, "I'm just hiding from my dog." There were other people behind trees like me, or crouched behind garbage cans, peering around walls, or watching from a vendor's booth on the opposite side of the ring.

Basically, we went to the dog show but could not see our dogs, let alone take photos of them in the ring. I get it, but still, it's strange. 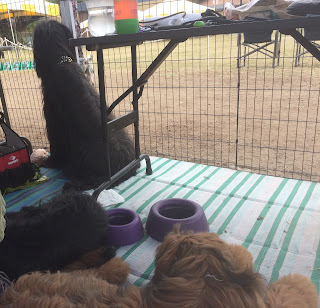 When I spotted Chou Chou outside the ring, then I could go over to her. We sat with my friends and their briards. There were six or seven tawny and black briards of different ages; some were loose in the exercise pen (the people were enclosed, too) while others were crated, and then they switched places. It was not a large area. Each dog went for a walk.

Chou Chou became friends with a briard puppy. But puppies do dumb things. When the puppy got too pushy, Chou Chou barked at her -- a correction. That's how puppies learn limits. 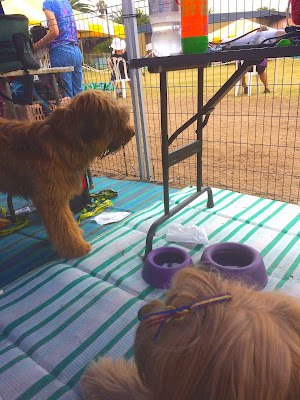 One of my friends put Chou Chou up on the grooming table to do some trimming. The pup had what the briard people call pancake feet -- long, flat-looking feet because the hair is too long. So Chou got her paw hair shaped. Then some hair on her stomach was clipped, and some hair around her rump, too. ("I don't mind being pampered!") A little was clipped off the hair between  her eyes. (Oui! I can see! I can see!")

We took a walk along the beach. There were many show dogs out walking. It's fun to see all the different breeds. 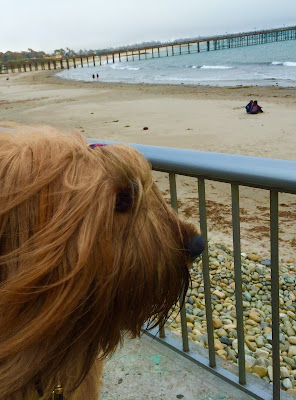 We went back to the motel for naps after a very long day!