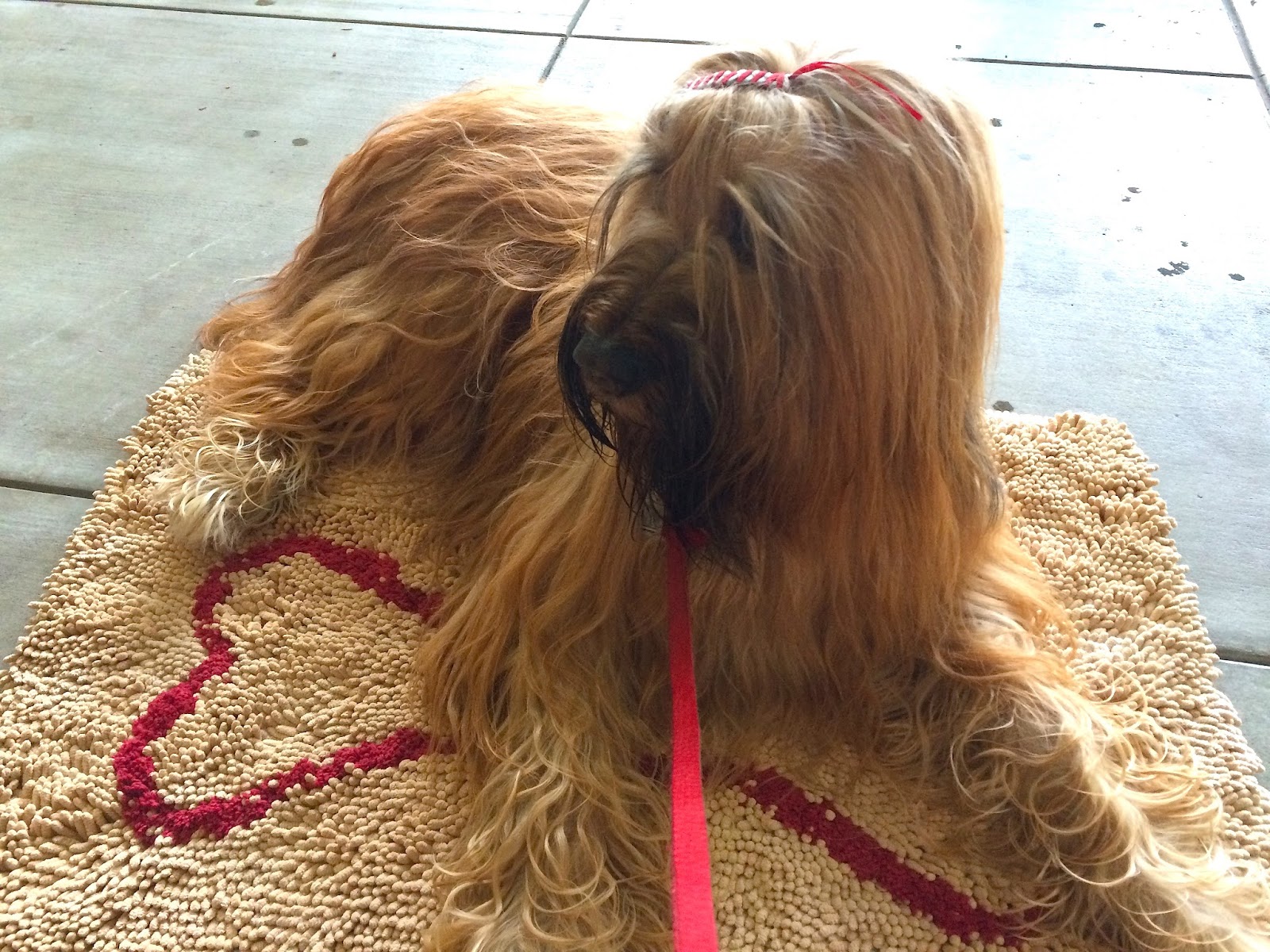 It's December -- time to de-stress college students before final exams.

Typical therapy dog shifts are one hour. The university event was three. And then, an hour library visit!

To make it even more challenging, it was raining hard. Could Chou Chou Briard be a perfect therapy dog for so many hours in rainy weather?

I put on her raincoat. It has a hood, but she didn't like it. ("Of course not! It was over my eyes and I couldn't see where we were going!") Her legs and feet, not covered by the raincoat, were wet.

I grabbed my things, and hers. Purse, umbrella, her mat to sit on, treats, and a poop bag just in case.

The event was held in a breezeway outside of the library. It was open on both ends of this long hallway, but it was dry. I would have liked to be moved inside, based on the weather, but this was the best the university would do for us.

Understandably, several people who signed up dropped out at the last minute because of the rain; there were 6 teams left. They each signed up for 1 or 2 hour shifts. But I was the event's Team Leader, so I would stay the entire 3 hours. ("That's not fair! You can work for 3 hours, and I''ll go home with someone else!")

I was at the university where I taught for so many years. I knew my way around, had a faculty parking pass, and knew many people there. It's an event I look forward to, twice a year.

Last December at the university, Chou Chou did great. But the weather was clear that day. She gets frisky in windy or rainy weather, and when an event is outside, it takes her a few minutes to understand that she is working. I was trying to hold her bag of stuff over my arm, my purse, and an umbrella, and still grip the leash.

She tried pulling me forward. I stopped whenever she pulled, or turned her around in a circle, and she did not get to race ahead of me. But it made the walk in the rain much longer. ("I was pulling to get out of the rain! And you kept stopping! How dumb was that?") 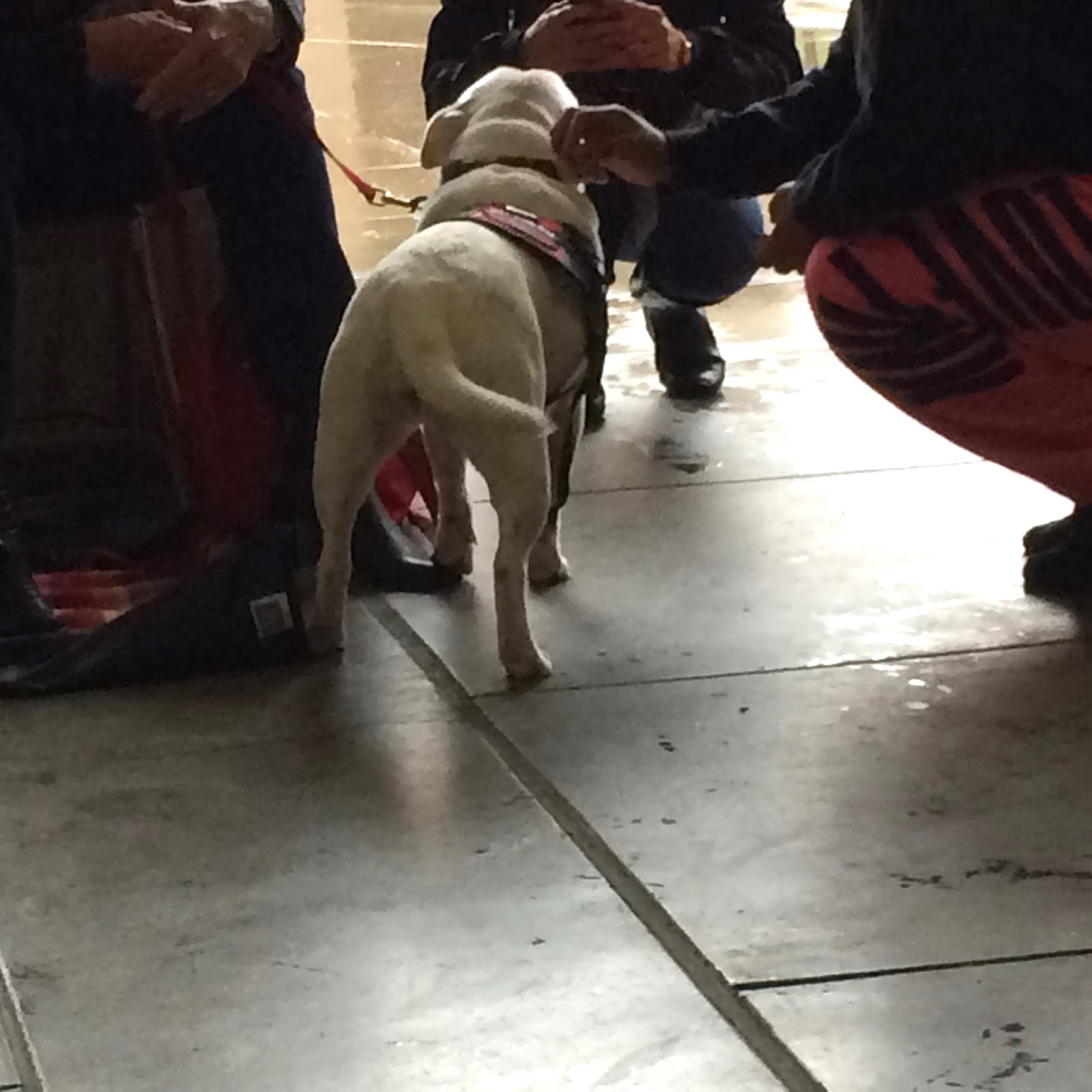 We were first to arrive but very soon 4 other teams showed up: poodle, golden retriever, labrador, and pit bull.

Chou Chou pulled on her leash towards each dog as he arrived. She does a big puppy bow when she greets others, with tail wagging up high ... that's good. 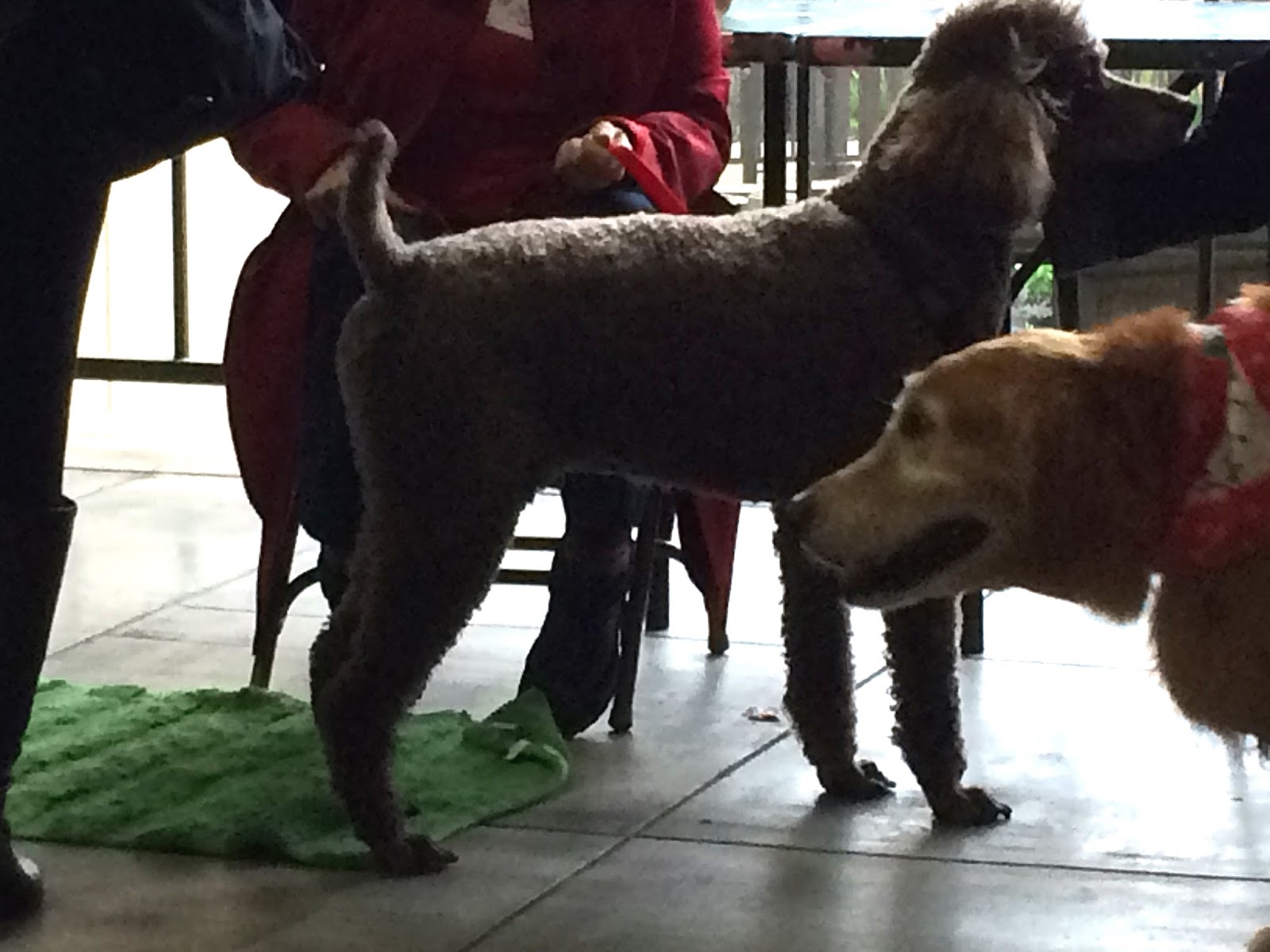 But she sometimes adds a loud bark -- it's a herding dog thing. That's not good.

Usually Chou Chou has no trouble being a quiet therapy dog. Here she is a month ago, standing nicely with others. 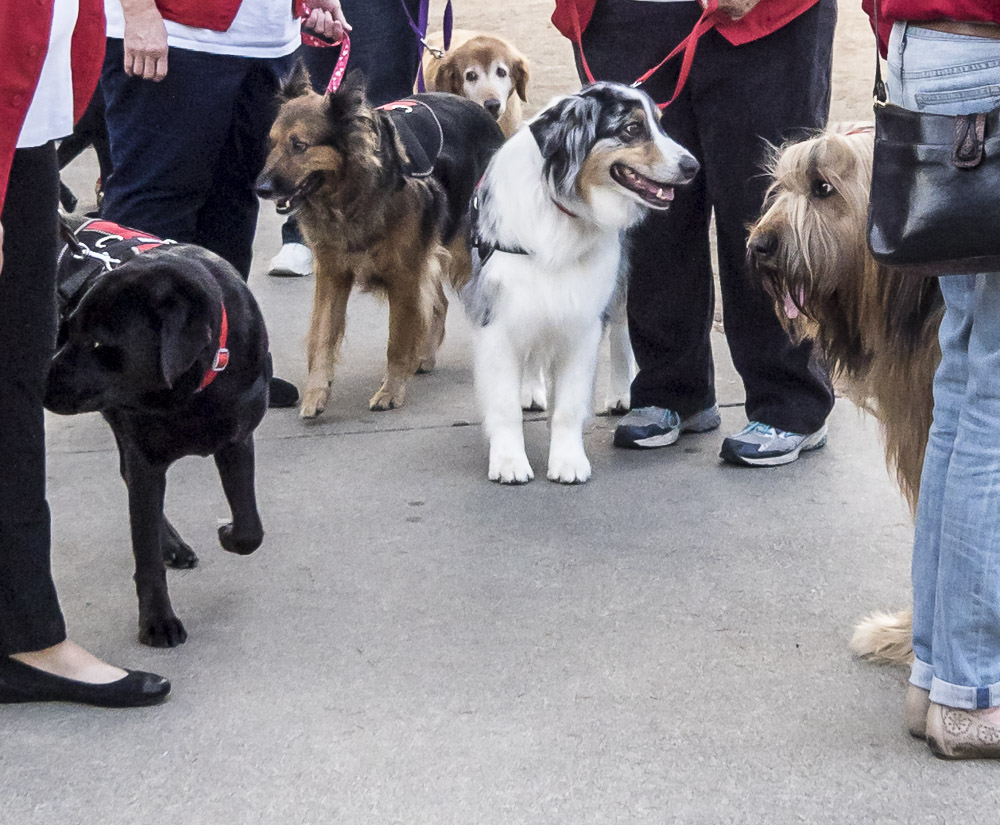 But this was not one of her calmer days. ("Sometimes I just want to be a puppy and play!") It's not okay to bother other teams, so we sat facing the other dogs, by ourselves. 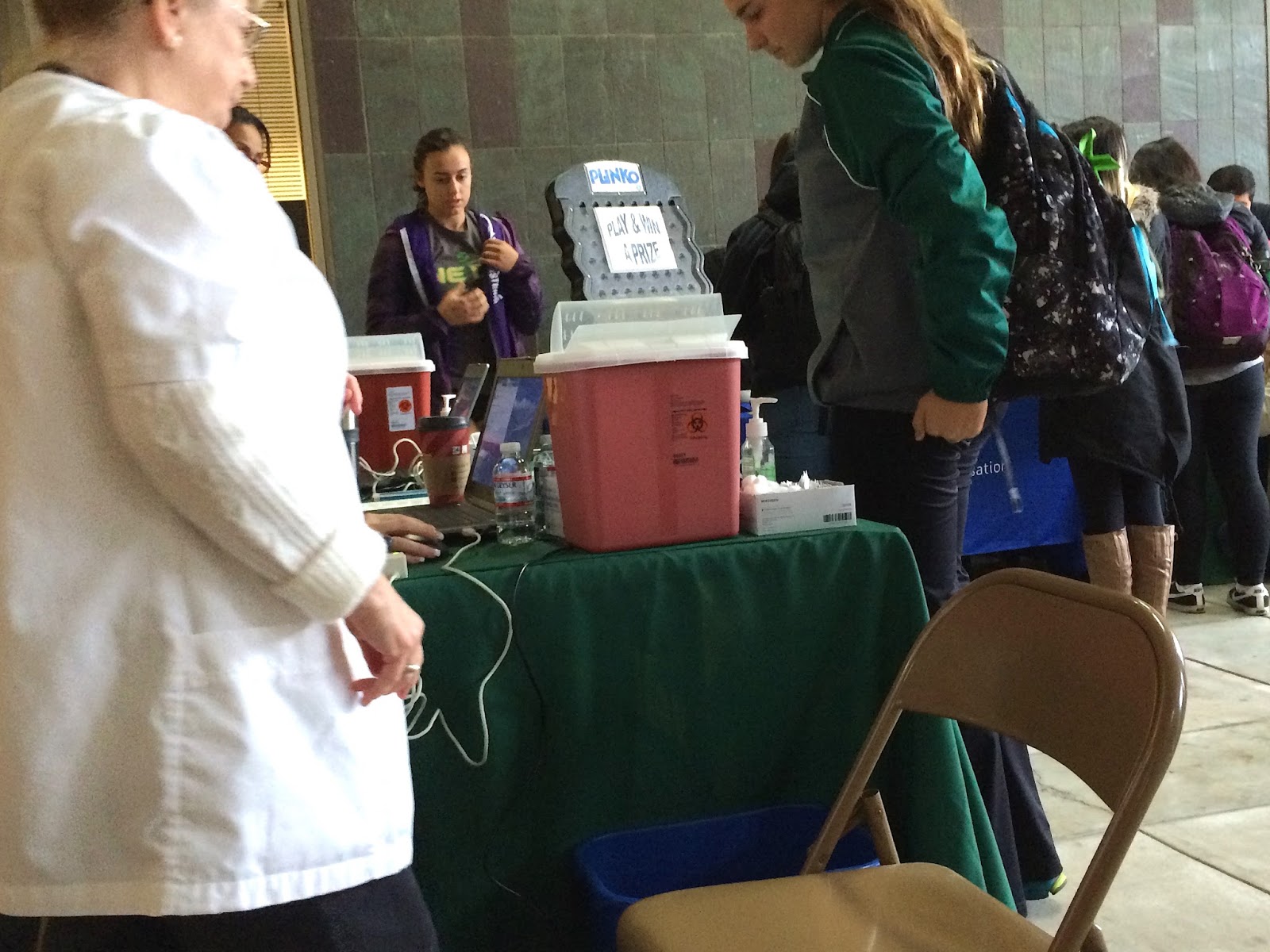 We were near a table set up by the health center to hand out information on stress reduction.

That's not all they handed out: to de-stress the students, they gave out bubble wrap.

The students were popping the bubbles to relieve their stress. Did they feel better? I don't know. But POP POP POP POP POP. Chou Chou was scared! ("A battle zone!" Run for cover!")

She was distracted from the noise when students were petting her. ("We are here to de-stress them! Do they need to do popping and stress me?!") Two hours done, and four dogs went home. Two new dogs came. Chou sat next to them without a fuss.

Our 3 hours at the university were done. I packed up. It didn't look like it was raining, so I didn't put on her raincoat. That was mistake. Soon, on the way to the car, the rain poured down and we were both soaked. 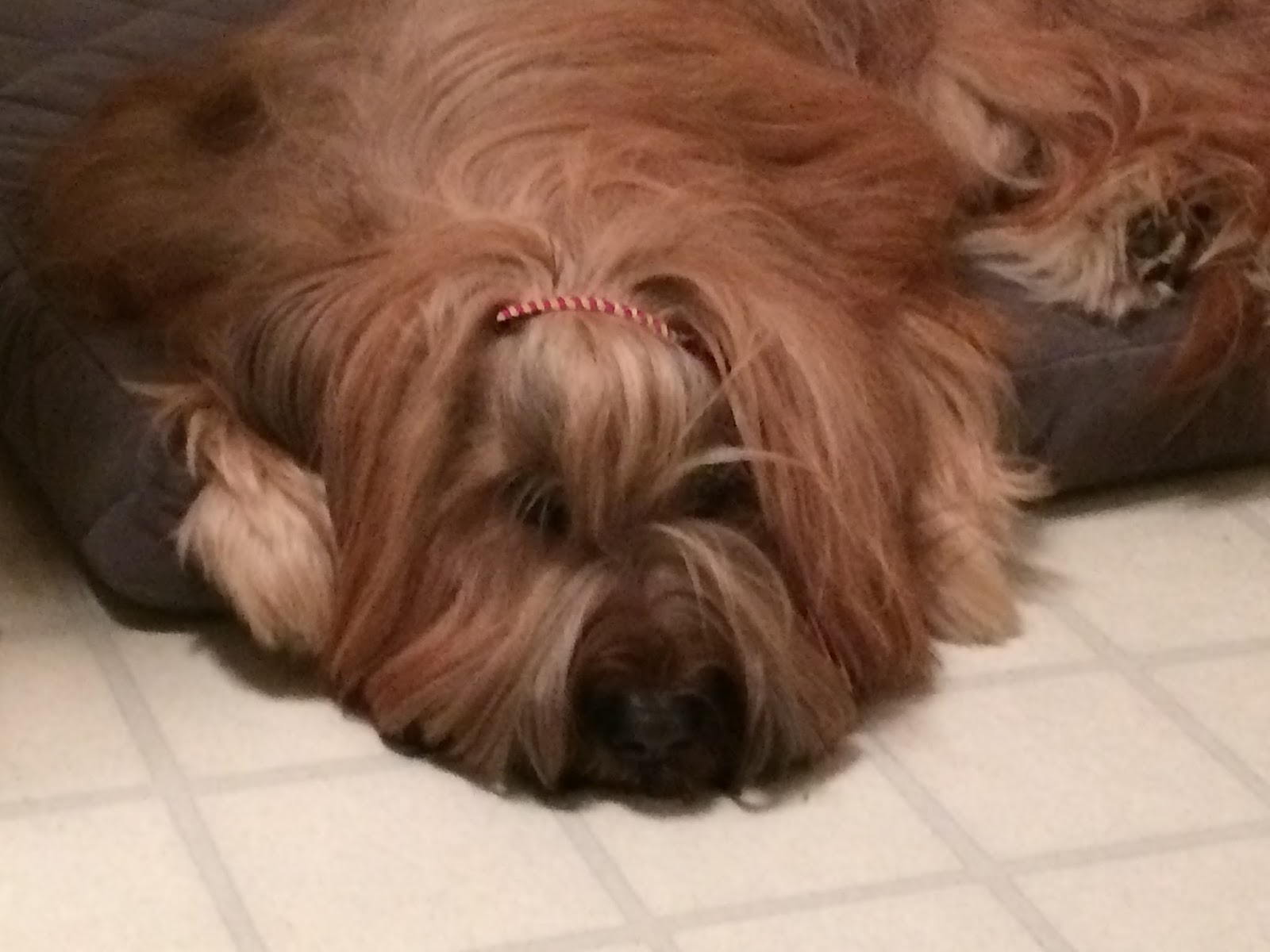 Chou Chou got home, I dried her, and she went into her bed. She didn't know that she only had 2 hours, and then it would be time to go to the library for Paws to Read. I am the Team Leader for that program, too, so we had to go.

It was hard getting her out of bed! But we made it to the library, both of us exhausted. On the way in, Chou Chou got a second wind and yanked on her leash to play with a little dog. She sniffed him and was satisfied. I put her mat down in the library, and she knew she was working; she settled.

The children came in and read to the 4 dogs. A little girl came over to Chou with a children's picture book about Marley; that's the dog from the adult book, Marley and Me, who was always getting into trouble. As she read, I told her, "Chou Chou's acting like Marley today." The little girl laughed and her mom said, "We know what that means!"

I think my pup and I were both glad when the hour was done, to go back home and get in our beds. Four hours of therapy work was too much today. 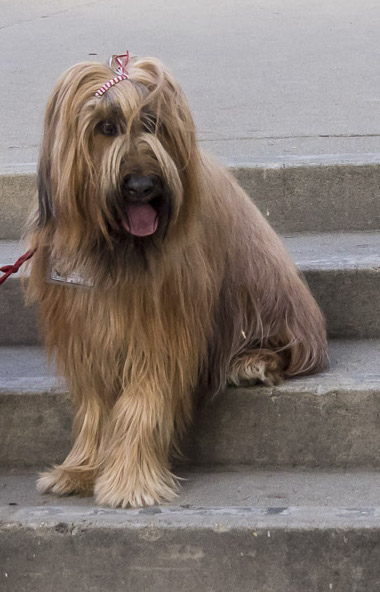