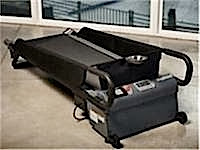 May, 2012. Chou was 13 months old, not diagnosed with hip dysplasia yet. I bought the dog treadmill so she could use it on hot or rainy days. After she was x-rayed, all the more reason to have it!


But she never would use it. She got on when I asked her to, even when it was moving, but she jumped off after a few seconds.

After she learned to love the underwater treadmill at the U.C. Davis Veterinary Hospital, we tried her on their land treadmill, hoping good experiences at the rehab center would generalize to the home treadmill. But no. She balked at that land treadmill, too. Even if her water treadmill session had only an inch or two of water, she liked it; but she stopped running  as soon as the water drained out.


And so it sat, this very expensive dog treadmill, taking up space in my home. Every now and then, I tried her on it, with lots of treats, but she would not run. And not only wouldn't she use it, but she started avoiding that half of the room. That's where her crate was, so after the treadmill came, she refused to hang out in her crate. It was no longer her safe haven.

I gave up, in practice, but I didn't sell the treadmill. It would be so good for her! It's a wonderful treadmill.

A few nights ago, I received a note from Chou Chou's physical therapy vet: one of her other clients was interested in buying a treadmill for her dog; if I had an interest in selling mine, I could contact her. So reluctantly, I pulled myself out of denial and decided that, if the person wanted it, and if the financial loss wasn't too great, I would sell.

She came with her husband to look at the treadmill, and they bought it. I gave them the directions and the maintenance kit. I watched as they wheeled it out of my house and tied it into the back of their truck. I watched them leave. What would her dog do with it? Would he run?

I really expected them to call me and say it didn't work for their dog, either. But no, I received an email telling me their dog took to it right away, just got on and started running for 15 minutes. They love it.

The next day, Chou Chou went to the side of the room where the treadmill had been ... and climbed into her crate! She hadn't used her crate since she was 15 months old, because  the treadmill was nearby.

Hmmm... I noticed something. She is cramped in the crate now. She must have grown since she used it last! ("That's okay! I can still curl up and be happy!")