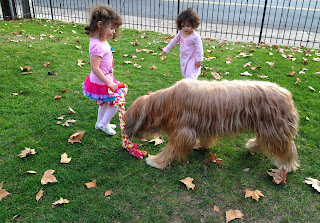 Thanksgiving weekend, and we had company. Last time the little girls saw Chou Chou, they were tentative. This time, they fell in love.

When big sister was two years old, she was fearful. When she saw Chou Chou, she would yell, "No! No! No! No! No!..." as she ran to hide from the big puppy. When little sister was a year old, she cried and screamed. Chou was so much bigger than they were -- she still is. ("And your point is?")

I didn't want them to be afraid of dogs. That would be terrible. So I sent them many of the photos and videos of Chou Chou that are posted on this blog. I thought that they could feel safe getting to know the big puppy from afar.  It was working; they started asking to see Chou Chou during our video chats. 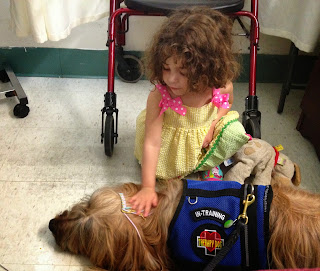 Then during last summer's visit, big sister, 3 years old, announced, "I am not afraid of Chou Chou anymore." And she reached down to touch. She was very pleased with herself. ("Big fuss for nothing! Do I look like a scary puppy?") Then she did what good big sisters do: she encouraged little sister to pet Chou Chou, too. 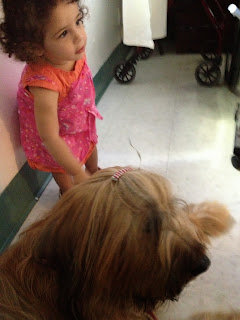 "It's okay. Come over here! Chou Chou won't hurt you." So little sister did what little sisters do: she followed her big sister's lead.  Tentatively, she touched, looking to her sister for approval.

I was relieved that the two girls were less afraid. They spent time with Chou Chou, sitting near her during that summer visit, although when Chou stood up, they backed away.

This Thanksgiving visit, they surprised me; they were enjoying Chou. When we went for a walk to the park, they both wanted to hold her leash. So I put on a second leash, and they both held onto the extra leash while I controlled the walk with my leash. They were so proud that they were taking Chou Chou for a walk. ("And you were proud of your good idea? No, no! You pulled forward, they dragged from behind, and I was in the middle!")

The girls picked a few children's books, and we read to Chou as she sat in her bed, just like when we go to the library as a therapy dog team. After all that practice with little children, Chou Chou knew what to do. She was the perfect, patient puppy.  She accepted the girls sitting on her bed, with all the hugs and petting they gave her. ("And pushing! And hair pulling! I was such a good puppy!")

Two toddlers can be active and loud. ("Oui!") When the girls yelled and jumped and Chou Chou had enough, she got up from her bed and went into another room; when they followed, she went back to her bed. ("I needed a time out!")

The next day, we played in the yard. I took out the pull toy we use with Toffee, and the girls hung on!


("And the next day, Toffee came to play with me! We played tug, too! I have so many friends now! I am a happy puppy!")