("What's going on here? I thought you were taking me to watch a dog show?!")

Yes, it was an agility dog show, the first I've ever attended, although I've seen videos of dogs performing in agility online.

I was unprepared to see people walking through the course with hands outstretched, holding imaginary leashes. Where were the dogs? ("We were sitting on the sidelines, watching the people show!")

The handlers go out first without their dogs, to learn the course and decide how best to move in the competition.

Briards are often competitors in agility and do well. There were no briards this time -- just Chou Chou as a spectator. 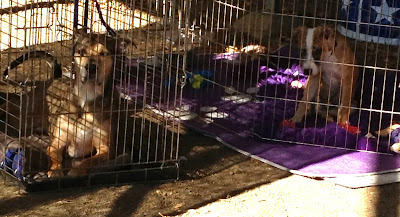 We were invited to attend by Chou's physical therapist at the U.C. Davis vet school; she was the chair of the show! She brought her dogs, catahoulas -- a breed I'd never seen before.

Chou Chou was being difficult. Usually she's in a calm heel at my side, but at this show she was pulling me all over the place!


She often gets frisky when it's windy, and I was having a lot of trouble controlling her. ("Dog park! The other dogs were running and jumping and I wanted to do that, too!")

She's strong! She was lunging at other dogs that walked by. ("I wanted to play!") I was holding the leash with two hands and trying not to get dragged by her, all the while trying not to drop the iPhone. ("You could have just let me go!") So hard to take video that way! That's why the video is short.

When I got home, I looked at what I had and found a video that appeared to be blank. I was about to trash it, but just in case there was something on it, I watched. And I had to laugh. It captured my physical struggling, and impatience, perfectly. ("I was the one struggling! You were out of control, not me!")

I enjoyed the show anyway. ("I made it more interesting for you! I participated! I am a clever puppy!")