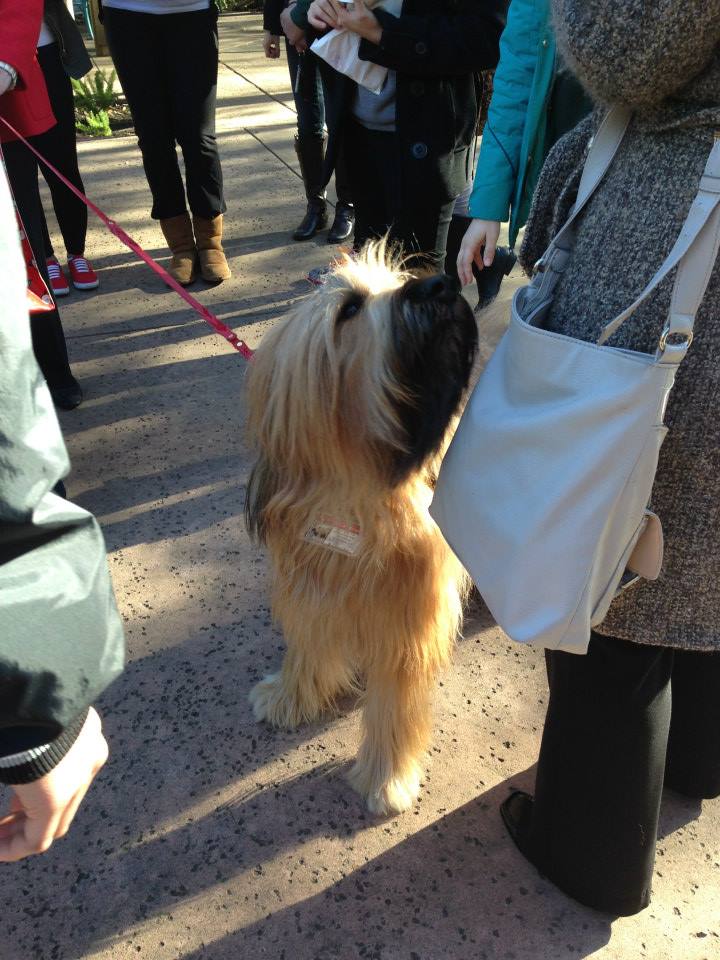 It was a nice day. I put on my red shirt with the animal-assisted therapy logo, and my handler ID on a lanyard around my neck; then I put on Chou Chou's red collar with her therapy dog ID, and off we went to participate in a monthly after school program --  to put on a show and teach children about dog safety.


On this day, there were 4 other dog/handler teams ... and 72 children!  They look forward to this every month and as they filed into the auditorium in a straight line, they were excitedly pointing at Chou Chou, the new dog! We walked in last; we would observe the other teams and follow along. The children sat in a large semicircle and the 5 handler/dog teams sat on benches in front of our audience. Our dogs were well-behaved ("Even me! Surprised you, didn't I?"), lying on mats that we bring for them. One by one, the handlers went to the center of the ring and introduced our dogs; we talked a little bit about the breed, the dogs did some tricks, and then we took 3 questions from the children in the audience.


When it was our turn, I introduced Chou Chou and told them she was a French herding dog who would round them all up if they stood and ran in different directions ("So true!"), and I mentioned the brave briards that, during the wars, got wounded soldiers off the battlefield. The children asked me 3 questions: 1) "How old is she?" 2) "What is her name?" and 3) "Where are her ears?"

Would Chou do her tricks in front of a large audience in an unfamiliar location? I didn't know, but I had special treats with me and she was looking at me very attentively ("I saw those tasty little liver treats in your hand, but you kept talking and not feeding me!") I began with something easy: "Sit." And she did. ("Finally! A tasty treat!") Ah, this will work.

"Give me your paw." Paw.
"Wave." And she did. The kids were loving this.
Then: "Give me a hug!" And Chou Chou jumped up and put her paws on my shoulders.
One more: "Take your bow!" And voilà! A beautiful bow. We took our applause and sat down. ("I was a good therapy puppy!")

The next part of the program was "musical chairs" ... without the chairs. It's called Musical Sit. The dog teams would walk around in a circle while music played, and when the music stopped, the dogs had to sit fast. The last dog to sit was "out." The children would judge. Well, Chou Chou and I had never done this before. We lasted only two rounds ("We must practice!") 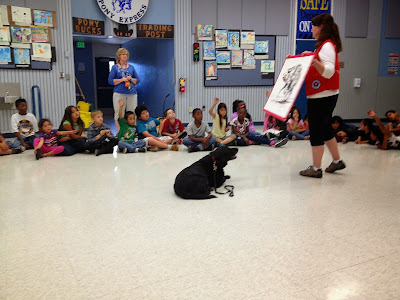 For the next part of the program, the Team Leader showed the children posters of dogs in different postures. She showed them which postures meant the dog did not want to be bothered. The children learned that if a dog tucks its tail between its legs, or has ears pulled back, or is eating from its bowl, leave it alone. This is basic safety around dogs and is very useful.

And then the program was over and the children formed a line again. This time, they filed passed the 5 dogs to pet them -- 72 children petting Chou, stepping on her hair, pulling at her ear, and giving hugs. She was the perfect, calm therapy dog. ("Overwhelming!")

One child asked to see her teeth, so sure, I showed him her teeth. He looked surprised, "Wow! She has really white teeth!" ("Merci!") "I brush them," I told him. And the handler next to me added helpfully, "But not with people toothpaste!"