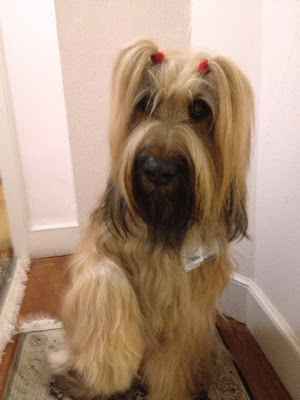 Chou's dog walker said she saw a black dog that looked like a briard, in a neighborhood not far from mine. No, it couldn't be; it must be just a shaggy dog.

At a dog park, a man mentioned seeing a "black briard, a couple years ago." But if another briard lived in Sacramento, surely someone in the briard club would have told me. So I dismissed these sightings ... until a car stopped, and a woman handed Chou's dog walker her card.

She said she owned a black briard named Luna, who was 4 years old, and she'd like to hear from me; this was the dog Chou Chou's walker had spotted while walking another client's dog. And the strangest thing was that Luna was bred by one of my briard friends; the breeding was almost 5 years ago, so my friend forgot to make the connection that we lived near each other.

I didn't know how Chou would react to a big black briard playmate. The PTSD from the attack was definitely waning -- Prozac is good stuff, with lots of counterconditioning -- and she is my happy puppy again. I thought she'd be fine. So we went for a visit. I brought a gift for Luna: a bag of liver treats. ("She made me give them! I wanted to eat them myself!") I bought some for Chou Chou, too. ("Merci! I am a happy puppy!")

Luna was grouchy at first. Chou was on her territory. She was behind a wrought iron gate surrounding their porch, where she could see Chou but not get to her. Luna was snarly and baring teeth, barking. Chou was not bothered by this, and went into a puppy bow, barking back but friendly. No fear -- it was wonderful to see her recovery from the attack in May. I handed Luna a lot of liver treats, and she decided we were okay.

She came out from behind her gate and both of the dogs went into their backyard, where the kids were playing. She didn't want to play with Chou Chou, but that's her normal; she goes to a dog park for fetch, but doesn't like to play with other dogs. Chou sniffed around the yard and Luna walked around. They were both content, and I enjoyed talking to the people very much.

Luna is very sweet. It's so nice to find another briard nearby! I hope we will see them again. I forgot to take a photo. Next time.

After the visit to Luna, we went to visit Toffee, where Chou Chou could wrestle with her BFF. An adventurous evening! ("Oui! I am a tired puppy!")