It was 1 a.m. when Chou Chou started barking and ran to the door. She was agitated. She continued to bark, so I was getting worried. I went outside with her on leash, holding some citronella spray. ("You think that will help you? Really?")

We checked the backyard, with a brief pause for her potty break. No Bad Guys back there. She was dragging me to the front yard. By this time, the little dog next door was barking, too.

And then we spotted him, over by the telephone pole at the corner of my yard. He saw us and ran across the street behind some bushes. I couldn't tell much about him, other than he was fat.

Chou was agitated; I took her inside and came back out, alone. I could hear her barking still. And now Brandy the cockatoo chimed in with her own version of barking.

I closed the gate to my yard and stood still, watching across the street for the intruder. I thought I could see his eyes, over by a tree trunk. But maybe it was just a shadow... no, he was there... he moved his head and stretched his legs. We stared at each other for a long time.

No question, he was dangerous. A large raccoon! They are cute, but they will attack dogs if they feel threatened.  ("I chased away the masked intruder! I am a brave puppy!")

That was an hour ago. All is well and we are going to sleep.

Tune in next time for another exciting episode of "The Masked Intruder!" 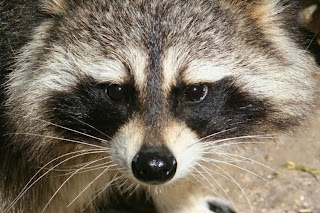 As a fur-mommy I know the situation!