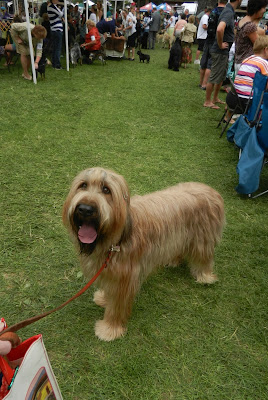 Labor Day Weekend. A Dog Show in Grass Valley, about an hour from me. I thought about entering, but I didn't have a handler and would have had to do all the grooming and showing myself. It seemed like too much trouble. But when my briard friends posted a photo online last night, taken at the Grass Valley show, I decided to take Chou Chou and drop in for the second day of the show. We needed another road trip, anyway, to end the summer.

I didn't call them to say I was coming, and I didn't know if they'd be there for the second day. I just got in the car and drove. ("I like to ride in the car! I don't know where we are going and I like surprises!")

The weather was hotter than I thought it would be, and it was a surprisingly long walk from the dusty parking lot into the fairgrounds. ("I could get my paws dirty because I wasn't entered in the show!") I brought a bottle of water for Chou Chou, but I would have to buy something for me to drink at the show. 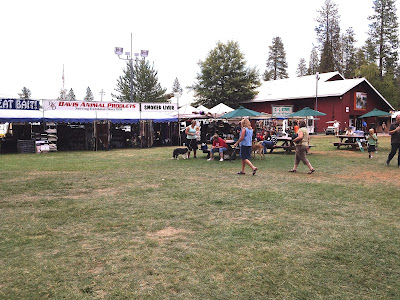 I walked in the gate and saw a large expanse of field  (my photos don't show the scale), with food stands, dog product booths and the show rings. I wasn't sure I could find my friends, even if they were there; I was looking for black briards. 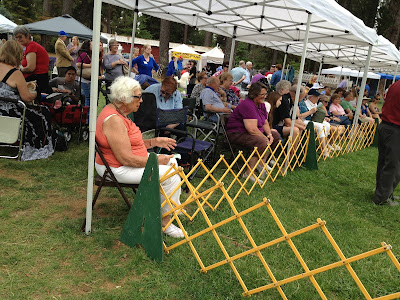 It was fun just to be there, watch the show ... and I wanted to buy a new, shorter leash for our therapy work. ("Another leash?? Really?") And then I saw one of my friends walking towards me, without briard, holding a cup of orange ices. 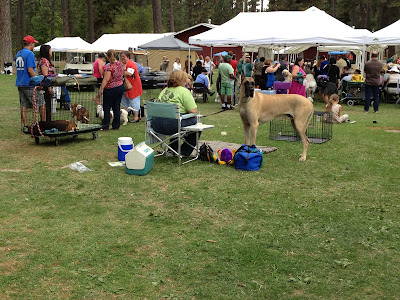 She noticed a tawny briard before she realized it was Chou Chou with me. We went to the grooming area where I met up with my other two friends ... and their 7 briards! They were all black, but different ages, some in separate crates and others in an exercise pen. Except for Hermes, their showing was over for the day and they were resting.

I gave Chou some water, and I handed her leash to my friend; the ices looked very good on such a hot day outdoors,  and it's much easier buying something at a stand without the pup pulling me towards whatever she wants to see. I was almost across the field, almost at the refreshment stand, when I heard shouts behind me. I turned and saw Chou Chou running full speed across the field to me, leash dragging. ("You forgot me!") I picked up the end of the leash and we both walked to the refreshment stand. ("Wasn't that better?") 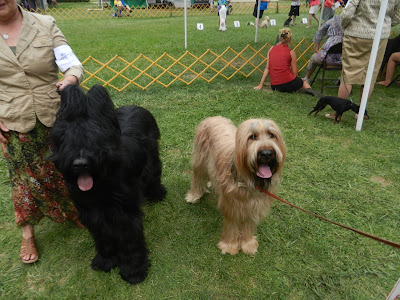 Hermes won Best of Breed, so he would compete in Best of (Herding) Group. He is only a year old, but he is unusually large, 90 lbs., and not even full-grown. Chou is a normal sized female and she looks small by comparison. While waiting for Hermes to enter the ring, a woman came by and took some photos of the two briards.

The show was ending. Hermes won Best of Group! Chou Chou got her new red leash ("And special treats!"). I saw my friends. And then it was time for everyone to pack up and go home. 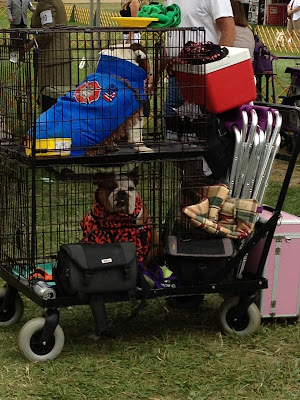 Some people who don't show dogs think it's a hobby based on the owner's vanity of winning. It can be. But most people enter because they are having fun with their dogs and love their breed. Chou Chou wasn't entered in this show and it was just as much fun as when she is competing -- probably better, because I was not stressed. Dog shows are about meeting other dog lovers, seeing all different types of dogs, and making new friends. ("Oui! New friends! And new smells!")