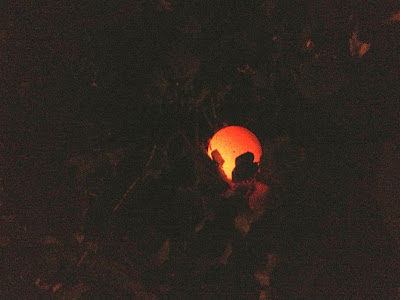 It's too hot to play outside during the day, so Chou Chou was running in the yard and playing with her glow ball  at night.

Then it landed in a patch of ivy. Chou was very interested!

She ignored the ball and poked her nose into the ivy. ("I found something better than my toy!") When she raised her head, she was chewing something.

I opened her mouth -- whatever it was, I was going to remove it. But what I saw was sticky and slimy. I didn't put my fingers in. I think she ate a snail. EWW!

Yuck! End of fetch for tonight!