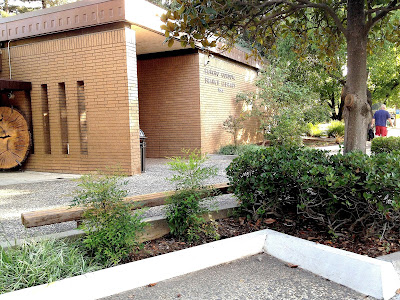 Chou Chou and I are working through our six trainee visits to certify as an animal-assisted therapy team. Since our first library shift, we have done 3 more.

Children bring books to read to Chou: she never criticizes, so they gain confidence.

Each of the libraries in the animal-assisted therapy program  has its own character. The library above had 13 therapy dog teams in attendance, including 4 black labs, a couple of  sleepy tan labs, and an 18 month old doodle puppy. Chou sat quietly next to a huge bernese mountain dog. It was a very large room, so the teams could spread out. There were more dogs than children!


The next library was the one I visited for my shadow visit, without Chou Chou, several months ago when I was deciding whether this program would be right for us. There were 6 dogs, and that felt just right. A boy came over to Chou Chou with a book that was about 100 pages long. And he started to read. From Page One. After 20 minutes, he stopped, thought for a moment, and then said, "Maybe I should go get a shorter book, with more pictures." And off he went. ("Oui! I like the picture books best!") 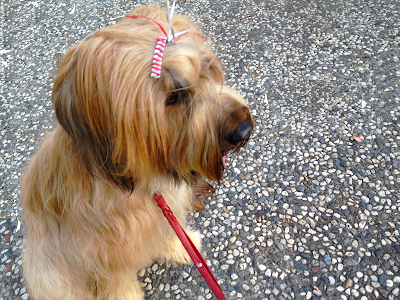 I am learning to keep a distance from the other dogs before we enter the library.  Outside, she wants to pull me over to other dogs, to play. To avoid commotion, I pick a spot where she doesn't see them. ("I know they are there! I smell them! I am being good!") Once she is inside and lays down on her mat, she appropriately ignores the other dogs, and she's very friendly and loving with the children.

Chou is less reactive to noises now, but is still not as confident and curious as she was before she was attacked at the schoolyard. The Anxitane didn't seem to help her, so I stopped that and started her on Prozac. It takes 6-8 weeks to be effective. Once she gets her confidence back, her bounce, she can stop the medication. But for now, this may help.

I had no idea that a dog could be so affected by being attacked, and get PTSD, long after the physical wounds have healed. If I knew where that rhodesian ridgeback lived, I would report the attack to Animal Control, as several vets advised me to do: Chou Chou was attacked in a schoolyard ... what if that ridgeback attacks children there? ("That was one bad dog!!")