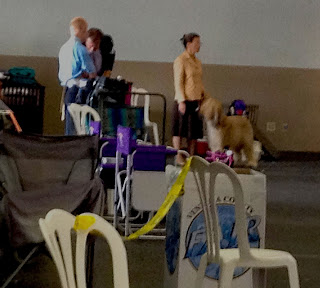 Last day, a third blue ribbon, then the same puppies to compete against. I learned my lesson yesterday and stayed out of Chou Chou's sight when she was in the ring. I stood at Ring 3 while she competed in Ring 4. So I have blurry pictures taken at a distance.

But I did see her run, and she looked good. Big dogs are usually shown in large, outside rings where they have room to stride, but this day the briards were in a small, inside ring. I didn't think it showed them moving at their best, and no one was sure why they were assigned to a small ring.

So guess who won? The black puppy. My friends weren't winning with their briards, either. 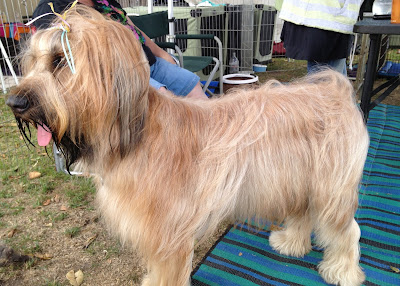 We went back to the ex pen for a little while, to say goodbye to my friends. I took some photos of Chou looking pretty. It was windy! ("I got my barrette back! I can see!") 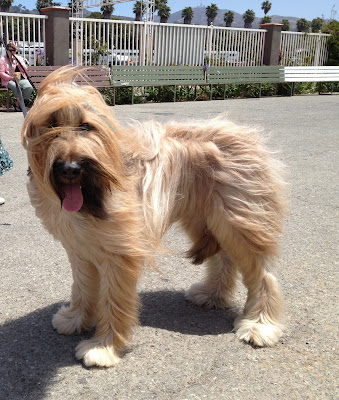 I was getting anxious to start the long drive home. It was Sunday of July 4th weekend, and I expected heavy traffic going north on I-5. Sure enough, bumper to bumper cars and trucks for the first 2 hours, then it eased up a bit. The trip home took 7 hours. Chou was so quiet, napping on the back seat, that I looked back every now and then to make sure she was still there!

I went to the show with low expectations for competition: the underwater treadmill, week after week, has been therapeutic for Chou Chou's hip dysplasia, but the chlorinated water is hard on her coat; the hair that was underwater, 10 inches of Chou, is broken off, so she doesn't have the thick hair on her legs that she should. But the physical therapy is more important than how fluffy her legs are! No one said anything about the hair, actually, and she exceeded my expectations all around.

I had just wanted a little vacation with Chou Chou -- a time out from my responsibilities at home, to go to the cool ocean and escape Sacramento's extreme heat, to see friends, to have Chou be around other briards, and maybe to lessen the  recent PTSD anxiety. The trip was all that and more. We had a good time. She showed well, ran beautifully, impressed onlookers, and took home 3 blue ribbons. Well done, puppy! 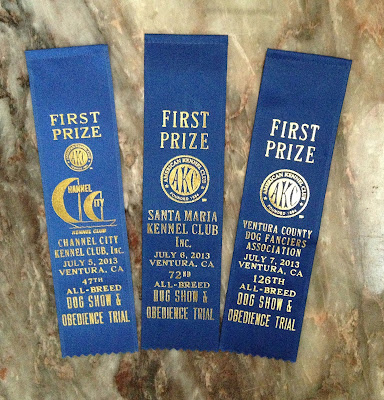