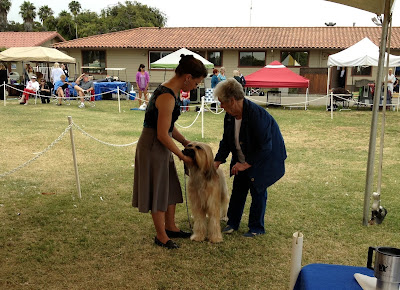 It was the second day of the show, with a different judge, but the same briards.  This time, I really messed up, not Chou Chou!

She waited for her handler to arrive at the briard ring, while an assistant held onto her. Karen had a time conflict with another dog she was showing in another ring; they often handle 14 or more dogs at each show! 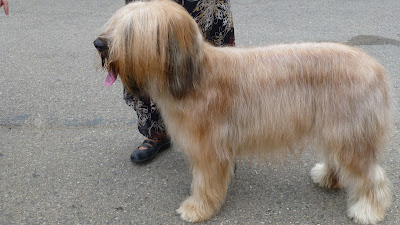 Briards were running late, so Karen made it to Chou on time. There is always a handler who will substitute when there is a conflict, so there was no worry, really.

She was still the only briard in the Open class, so another blue ribbon. ("Blue is a good color for moi!") And she was more alert today, so she showed even better than yesterday, more in tune with her handler. ("I slept better! But I could run even better at these shows if they let us see where we're going! I want my barrette back!")


And again she moved to the next level to compete against the same black puppy that won yesterday. I took these photos and videos before Chou noticed me.


Karen asked me to stand next to her ringside, stay low key, to relax Chou Chou so she'd be comforted. At shows last year,  she didn't care where I was when she was in the ring. But this year, Chou is unsure of herself, not confident and feeling needy.

She saw me as she ran, and started to veer towards me. I did exactly the wrong thing: I panicked and moved out of her sight. Then she zigzagged to look for me. Karen got her back under control quickly, but this was a judge who was known for not tolerating "misbehaving" in the ring.

The black puppy won again. Would Chou Chou have beat her if I had been out of sight, or, once she saw me, if I hadn't moved? One of my friends thought maybe so. We'll never know, but I felt terrible!! Tomorrow, I will be out of sight! 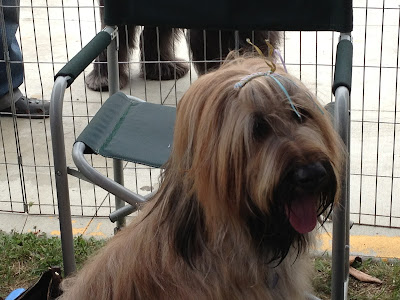 Then Chou went back to the ex pen, and I went to lunch. My friend took her for a walk and told me that a woman stopped them to say that Chou Chou was "the most beautiful briard she's ever seen." ("So take that, little black pup who beat me twice!")

She seemed more relaxed in the ex pen today. Once, she snapped and growled at one of the puppies and I got really worried that she was being aggressive! But my friend said, "No, Chou Chou was right! She was teaching the puppy manners." ("Didn't you see? That little creature bit my paw!")

I took Chou for a walk through the vendors' booths. That's always fun at dog shows. All kinds of speciality products you'd never see in pet stores: high end shampoos and brushes, nutraceuticals and probiotics, handmade soft leather leashes, toys, and all sorts of breed-specific items for people. I bought two new leashes for Chou; one is a red 4 ft. leash for her therapy dog work, and the other is light tan and light gray suede braided together. ("Très chic! A briard girl needs many leashes!")

Back to the motel and back to my crackers. My lunches are becoming my only decent meals at Ventura. ("But I get all my meals and lots of tasty show treats, too!") 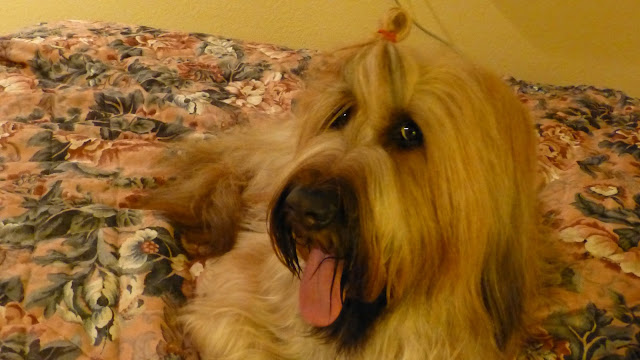