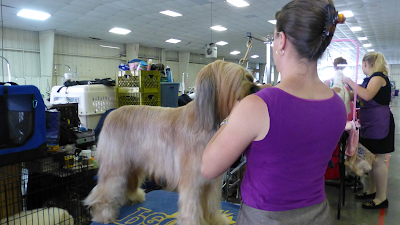 We didn't sleep much last night. Chou Chou was panting and shaking the bed. I kept turning up the air conditioner fan   until finally she was cool enough to sleep.


My iPhone alarm didn't go off! Fortunately Chou rolled over and woke me up, just in time. No breakfast today; no time for me to eat, and Chou gets lots of treats with her handler. 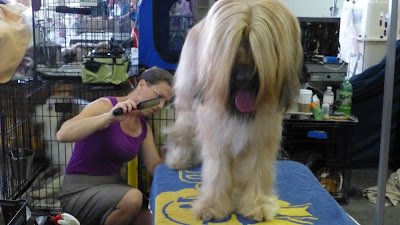 First stop was to find the grooming building and Chou's handler. I was late because of the phone alarm fail, so I was stressed - not good for Chou! But we made it. I watched the grooming for a while, then left Chou to settle in with her handler. 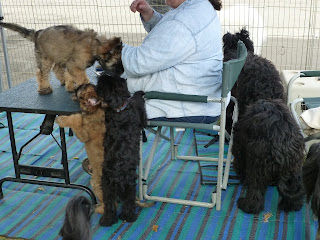 I went to find my friends. They had a grooming area outside. They brought adult briards to show, and a few puppies  to socialize them. Lots of people and lots of briards in an exercise pen... can you count the number of dogs in the photo? (My friend's head is missing for her privacy. I can frame photos better than this and not chop off a head. Really. I can.)

Chou Chou was entered in the class of briards called "Open Bitch." That's an official AKC category. Really. It means female over the age of 2 years. And what do they call male dogs at a dog show? "Dogs." So Chou at a dog show is not a dog. Hmmm. I am told that males used to be "Studs," but it changed at some point. A dog show ring is the only place you can say, "I don't like that black bitch" and not mean anything derogatory or racist!

All the briards gathered at Ring 12. Chou Chou came to the ring with her handler, ready to go! She was the only briard entered in Open Bitch, so she took the blue ribbon. No competition, but I love her ribbon anyway! She is a beautiful briard, competing in this event that draws the best show dogs from all over California.

And the best part? She ran beautifully! Not just normal gait -- briarders came up to me and said she ran "beautifully." No sign of the hip dysplasia that was causing her pain last year. Chou Chou's year of physical therapy -- the adequan injections, joint care supplements, laser, underwater treadmill -- has given her a normal stride and a happier life!

As winner of her class, she got to compete against the winners in the other classes, the puppies. 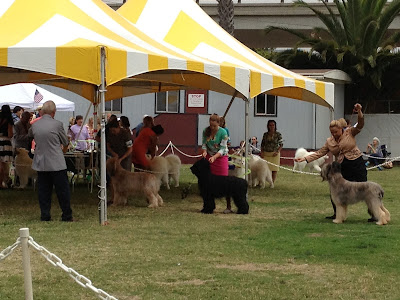 The winner at this level gets the points  towards becoming a  champion. Chou Chou (left) didn't win; the black puppy did. But I thought Chou was the best! The feedback from the briarders and the handler was that Chou has a great coat (in texture and color), nice structure, moved beautifully, and showed well. One briarder  even thought she was best and should have won. I was very pleased! ("Oui! I did well and got many tasty treats!")

I was also very hungry. I missed dinner last night; I just checked into the hotel after the long car ride and ate some crackers I brought from home. Then I missed breakfast because I was running late to get to the fairgrounds. So my friend took Chou Chou for a walk around the show area, then Chou sat in the ex pen with all the other briards, while I took a walk down the boardwalk along the beach and ate at a restaurant near the water. The ocean air was clean and the temperature was in the 70's -- delightful.

Then back to the fairgrounds. I sat in the ex pen with Chou, the other briards, and my friends. Chou seemed okay, but she didn't play with the puppies  -- so unlike her! And noises that never bothered her before were startling her and causing her to jump. I could see the anxiety, the result of the attack she suffered a few weeks ago. The puncture wounds on her face were healed, but her confidence was shaken. I was glad I scheduled a consultation with the veterinary behaviorist, in a few days.

Still, it was good for her to be at the show. She was not barking at other dogs and did not seem afraid of them, an improvement from last week. And going for walks with my friends or being with the handler instead of me is confidence-building, too.

Later that night, Chou Chou slept well. ("This bedspread is a good color for me! I blend, so you can't find me!") 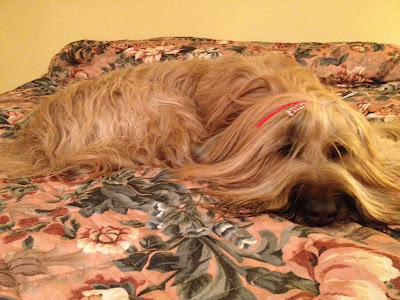