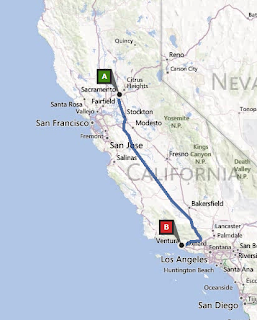 What do people do on the Fourth of July? We go to Ventura to the dog show! There are more than 2600 dogs entered. It's a long drive for someone like me who doesn't like to drive (although Chou is very good in the car). But ten days of temperatures over 100 degrees is enough, and I was ready for cool ocean weather!


And a dog show might be just the thing for Chou Chou, to desensitize some of her fears from being bitten at the schoolyard: lots of very calm, controlled dogs and some briards to play with, too!

So I packed up all her necessities, and a few of mine; Chou climbed in the back seat, lay down, I got on I-5 South, and kept driving. It took 6 hours to get there, but the traffic was moving at 70 mph (and faster), so it wasn't too bad.

The problem with traveling with a dog is that dogs can't go into restaurants and by the end of the drive, I was hungry! I stopped at a Starbucks. I would never leave her in the car alone, even on cool days. I parked and saw a police officer near the Starbucks door. I asked him if he would keep an eye on Chou while I ran in for something quick, to go. He said, "I'll make you a deal. I was going in for a straw. If you can bring me a straw, I'll watch your dog." Deal! I bought a scone quickly, grabbed a straw, and went right back out.

The officer had the car door open and was talking to her in French! He checked her name tag ("He asked to see my ID!") and recognized it means "sweetie" or "cutie pie" in French. ("I won't tell you what he said. It's our secret. But he was  very nice and gave me French kisses!")

And so we arrived at the motel. The cars in the parking lot had breed stickers on them: the golden retriever SUV, the poodle SUV, the labrador retriever van ... and my Mini Cooper with the briard decal. We would need to get to the fairgrounds early the next morning to meet with Chou's handler and give her time to be groomed; the briard ring time was 10:00 a.m. 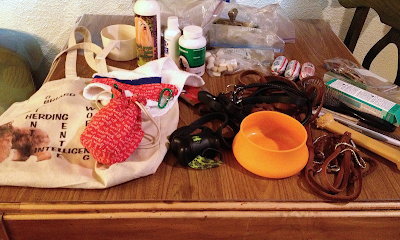 We got into the room and I spread out all of Chou's necessities on a table: a bag of her food for 3 days and the measuring scoop, supplements for the hip dysplasia, treats, a treat bag, food/water bowl, toothbrush and paste, shampoo and conditioner, walking leash, show lead, dog cleanup bags, chew toy, brush, comb, barrettes, and the bag to carry everything!

She had her dinner, walked outside with me to the grassy area of the motel, and then she went back to the room and without being invited, she jumped up on the bed! 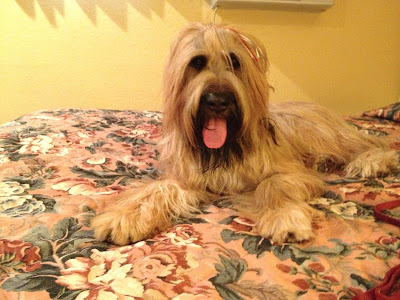 She doesn't sleep on my bed at home, but she slept on the motel beds last year at dog shows and somehow knew she could do that here, too. ("I can sleep on beds with flower bedspreads!")

There were some 4th of July firecrackers set off in the parking lot, but not many, and Chou seemed too tired to mind the noise. I set the alarm on my iPhone, ready for tomorrow's show.

Sounds like an awesome road trip. Bear and I have been plotting away - we're going to be taking a trip in August too. It's always an adventure and an exciting one to boot!