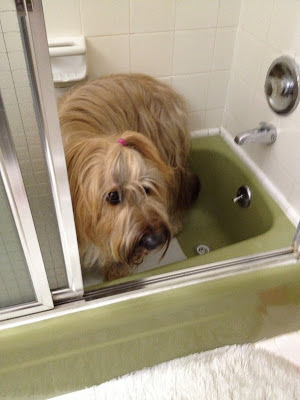 It's unbearably hot today: 108 degrees outside, a Sacramento record for the date.

People who have lived here all their lives dismiss the temperature as "it's just dry heat." Well, so is an oven, but you don't put your head in!

Here is the thermometer that hangs on a wall outside my house, in the shade. Yesterday it was not as hot, and Chou went out with her dog walker in the morning when it was cooler. When she came back, it was time to feed her and give her the omega 3 capsules to help her hips. Nothing is free: she does a trick for each capsule.

I asked her to bow, but she lay down. Strange! That's one of her favorite tricks. I asked again but still no bow. Then I asked her for a hug -- the only time she is allowed to jump up on me -- and she just stood there.

I worried that she hurt her hips on the walk and didn't want to extend her legs to do those tricks (which are also therapy exercises). I called the dog walker, but she said Chou Chou heeled well, no lunging at squirrels or ducks, no problems.

I waited a few hours, then tried the tricks again, and she was fine. I don't know why she didn't do that this morning. ("Because I just got home from my 45 minute walk and I was too hot to bow or jump around!")

So what can Chou Chou do in this heat? With a 108 temperature outside, but air conditioning inside, I thought this would be a good day to try the dog treadmill again. She wouldn't use it last year, so I let it be. But today I tried again. I got out the treats, started it at a slow speed, and called Chou Chou. She isn't afraid of it; she got right on it. ("Three times!")

Each time, she took the treat and jumped off. ("I am a smart briard!") She would not run on it. She loves underwater treadmill, but not this. ("I can't get out of the water tank, but I can jump off this one. I take my tasty treat, then au revoir!") I am putting it up for sale. ("Yay! Happy dance!")

In the evening, it was bath time -- another good thing to do on a hot day. And tomorrow morning we have an orientation for the animal-assisted therapy program, and their rules state that the dogs have to be newly bathed.

I got out her shampoo and towels and conditioner, and started to run the bath water... and immediately Chou came into the bathroom, pushed me aside, and climbed into the empty tub! 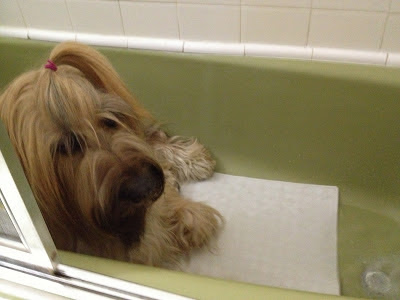 She lay down and waited for the water. Cotton balls in ears to keep water out, then the shampoo and a spray of conditioner.

I just read in a dog magazine that if I wash the head last, then she won't shake the water off herself (and onto me) until the end. ("Ha! That didn't work!")

Then the blow dry and the brushing. ("And then dinner!")

Tomorrow is supposed to be much cooler.