There are two animal-assisted therapy groups in town, and some people are in both. So I thought I'd explore certification with Chou Chou in the other group, too -- the more education and learning experiences, the better.

I took the online course for the second group over several weeks, passing each unit's test with a score of 100% right. When I passed the final assessment, I got a certificate as a handler. Next step, Chou and I went to the pre-screening, last night.

I was apprehensive. The email contact with the evaluator was strained: I mentioned that I had gone to a meeting of the other group, and it went downhill from there. I guess not everyone is open-minded about the co-existence of the two groups; she told me why her group was better and seemed very critical that I had gone to the other (and liked it). But I was determined to do everything exactly as she wanted, so Chou Chou and I could win her over and prove we were serious about doing this program.

The instructions for the pre-screening were very exact, as were the rules in the online course. Dogs must not greet each other (a good rule!); leash can be 4 or 6 feet long and Chou's leather collar was okay; treats should be small and soft, so I bought training treats; be prompt; hands should be free, so leave purse home and put whatever I needed in my pockets; dogs should be clean, groomed and nails short, so Chou got a bath and I took my wet pup home to brush and dry her. 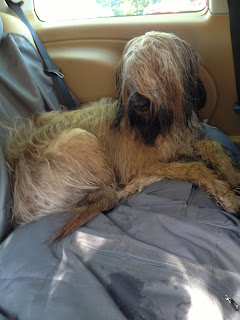 I never doubted that Chou would perform well, as she has been great in similar situations before. And after the long morning walk and the bath and brush out, Chou was tired and calm.

We were in a conference room in a hospital clinic, 8 dogs with their handlers. I sat in a corner, with Chou sitting at my side. But she did not sit still for long: she fidgeted, she stared at me, she got up and pawed at me. She was being disruptive in a situation where she had to be quiet and obedient. What was going on? She wasn't bothering the other dogs, just concentrating on me and vocalizing (not barking; more like talking) at me. I tried to get her quiet, but she persisted. I was aware that we were being stared at and judged.

The evaluator addressed the group and stressed that she would be honest if she felt a dog or handler was "not ready"... that it was nothing personal. As an example, she pointed to "the dog in the corner who is acting up." That was Chou Chou.

I was already under a great deal of stress over the last two weeks, and I had considered not attending this meeting. My mom is very ill, back in the hospital, and I have been there with her, meeting with her doctors and nurses. But the animal-assisted therapy pre-screenings are infrequent, and I didn't want to miss it. I told the evaluator my family circumstances, but without any empathy, here she was, singling us out to the others, and shaming us. Nothing personal? Of course it was!

I was doing everything I could to quiet Chou, but she would not settle down. Such odd behavior from her! Then 4 dogs at a time were asked to walk in a circle, and obey the Down command, Stay, and Come. So we walked; I told her "Down" and she went down. But the evaluator came over and said, "That was an accidental down. Do it again." Accidental down??

So I said, "Down." Chou went down. I said, "Stay" and she stayed while I backed away from her. Then "Come" and she did. And the evaluator said to me, "Where's the praise?" I was shocked. I had called Chou Chou, she had come, and I gave her a hug and rubbed her ears, which she loves. I had to say "Good dog," or whatever, or it wasn't good enough?

That was the last straw; after the emails that ranged from cold to nasty, after singling out Chou's fussing to everyone there, after making us do the down over... and where was her praise to us? I broke down in tears, and told her, "I shouldn't have come tonight." And with that, she motioned for me to follow her, and Chou and I were escorted out of the building!

We walked back to the car. This evaluator had cruelly humiliated me in front of the other teams. And Chou had been out of character and behaved badly. Chou Chou, the pup who had done well at the other certifying group. The pup who did great visiting a nursing home when my mom was there -- doing real animal-assisted therapy calmly and with a happy attitude.

We don't need to be in this second group; or, we could go to a different evaluator -- it's not the group that's mean, it's just this evaluator.  We will certainly continue with the other group.

I have no doubts that Chou and I will get certified and be a good therapy team. Nevertheless, I kept going over in my mind what happened, trying to understand what went wrong with Chou.

And today I figured it out, in a blinding flash of the obvious: yes, I had done everything exactly as that evaluator asked, right down to the new treats... in my pocket... and that's the answer. Chou Chou was seated near my left pocket with the high value treats, and she wanted them!

("Oui! I tried so hard to tell you! I tried staring, pawing, standing and nudging, and little barky noises, but you weren't paying attention to me! You just kept looking at the talking woman in the center of the room. Tasty smelly treats in your pocket and you weren't giving them! How sad!)