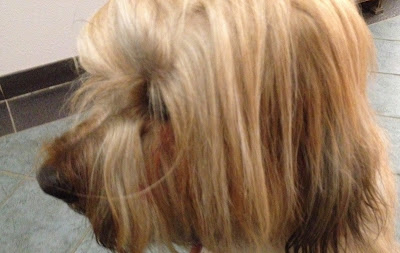 Chou Chou went to run and play at the schoolyard, as she does most evenings. Her friend Toffee wasn't there. There were three dogs I had never seen before; one was a large rhodesian ridgeback. She ran toward it and barked, quickly veering away, when she first got to the playground. I apologized to the owner and assured him she would not hurt his dog (or any other). He nodded okay.

She ran a bit with a labradoodle puppy and then the ridgeback's owner threw a ball and the 4 dogs ran. Chou is never interested in the ball; she runs after dogs that are running to the ball ("I can't let them get away! I'm a herding dog, not a retriever!")

Suddenly the ridgeback attacked and was on top of her, biting! He was bigger and stronger than Chou, all muscle. I ran to her. If this has ever happened to your dog, you know how frightening it is to see your dog being hurt and you feel so powerless!

The owner just stood back. The puppy owner helped me get Chou out from under the ridgeback, while the owner said and did nothing.

I was holding Chou protectively, putting her leash on as fast as possible to get her out of there. In anger, I asked the guy, "Has your dog ever attacked like that before?"

He answered, very calmly, "Only if another dog is trying to take his ball." I was shocked, and the first (stupid) thing that came out of my mouth was, "She didn't want the ball!" He answered, "My dog didn't know that." Crazy!

He was admitting that his dog had an aggression problem and he seemed to think that was justifiable. No apology, no  concern to ask if she was okay. I left quickly. And he continued to play ball with his dog, as if nothing had happened. From when we got there to when we left, it was a only about 5 minutes.

I took Chou home and my first thought was to brush through her hair very quickly, separating the hairs to find any skin wounds, and then we would go to the vet. The deepest one was just a couple centimeters under her eye -- if that dog had bitten just a little higher, she would have lost an eye. She also had another puncture on her face (but not as deep) and inside her ear.

I felt sick as I watched the blood trickle down the long hair on her face, and didn't look further. I put her in the car and drove to the "after hours" veterinary hospital, where we waited to be seen (after a kitten with a broken leg and two dogs with foxtails in their noses). 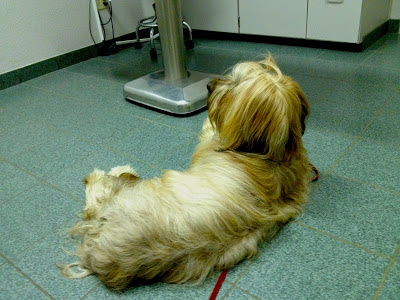 The vet looked Chou Chou over more carefully. And she told me that something similar had happened to her own dog. She understood my anguish. She checked Chou's eyes and they had not been injured. She cleaned the wounds ("That was ouchy!) and decided against stitches under her eye, because she wants it to drain. She wants me to use Neosporin three times a day for a week, and a warm washcloth.

There used to be about 5 or 6 dogs going to the schoolyard, all puppies or old dogs, and they played well together. But the canine crowd may be changing. Mike recently told me that there were two large huskies that attacked Zoom, his elder German shepherd, and Mary said a boxer went after Toffee.  I feel very protective now and don't know if I will let Chou Chou play there anymore.

"Oskar, you are so sweet. I will be okay. Thanks for thinking of me!")

I Hope Chou Chou is ok - What a scary thing to have happen!