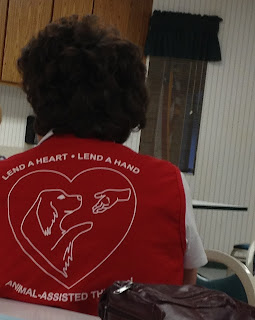 Chou Chou and I are starting the process of getting certified for animal-assisted therapy. I've wrtten about my library (shadow) visit. But tonight was the first time Chou would meet with everyone from the certifying group at the monthly meeting, and I wasn't sure if she'd lie down quietly with other dogs nearby.

Chou Chou and I walked into the lobby where the dog teams were gathering; there were also many people with canes and wheelchairs -- it was their residence center. Chou was calm and let people pet her, take her photo, and walk by. A man in a wheelchair came to talk with me and to meet Chou Chou. I knew to have her on the side of his chair, not in front, so he could reach her comfortably. She put her head in his lap. It was one of those sweet moments when people watching say, "Awww. So cute!"

Then one of the group's officers showed us to the meeting room. So far, so good! The dogs and people were coming in, so we sat at one of the corner tables.

To my left was a little poodle. Uh, oh. Chou loves to play with poodles. Sure enough, she got into her puppy bow, wagging her whole rear end, and let out a loud bark! ("All my barks are loud. That's all I can do!") I thought, "That's it. We fail. They're going to kick us out."

But they didn't. I put Chou Chou into a down stance immediately and although she was right next to the poodle, she put her head down and relaxed. I was so relieved.

The meeting began. The new people and their dogs were being introduced. When it was our turn, I walked her out of the corner, to the center of the room so people could see her. "This is Chou Chou." And she went into a bow. Perfect. And then we went back to my seat.

Every now and then Chou would pop up and look over the top of the table ("The people were passing around peanut butter cookies! I thought if I'm quick... Almost! Next time!"); otherwise she stayed in her Down. After the meeting, I said hello to the president and handed in our paperwork: my statement, a verification of health from the vet, and a detailed and glowing verification of her ability to do therapy work from her trainer.

The evening went very well. She can do this! ("You doubted? How sad!") The next step is not until June, the orientation, and then later in the summer, the evaluation. I am excited to begin!