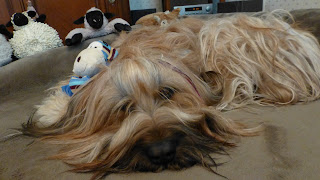 I took a couple weeks off from underwater treadmill. It's so expensive. She still had her walks and her playtime with other dogs. But over the two weeks, it seemed like Chou Chou was running a little crooked, then more so.

I was going to go back to Davis next week, but I was worried; so I made a quick appointment and took her today.

Unfortunately, the physical therapy vet agreed with me; Chou Chou was running crooked and her hips were swaying. So they started off with laser therapy, in case something was inflamed and hurting her, and then underwater treadmill.

Two weeks off, just two weeks, but she couldn't run in the water as fast as she used to, so they had to drop the speed. And she didn't run as long, either. End of my experiment with cost-cutting. I can never take time off again.

I had let myself go into denial about the seriousness of hip dysplasia and the lifelong commitment, every single week. It was less sad that way. The reality is that this is not a problem that can be solved. This inherited disease doesn't actually get better -- it progresses. It is just managed during the time it is treated.

If her muscles stay strong, then the muscles can hold the malformed hip joint in position and keep her comfortable as long as possible. And then? If she needs it, then hip replacement therapy. I am committed to her well-being.

So okay. I will pay for all this and take the weekly trips to Davis without breaks. She will get better.

When I got home, I called her vet at Loomis Basin and got a same day appointment; we started the Adequan injections again. When they stopped working last year, I stopped, but they did work at first. So now we go back to twice a week for a month. With traffic (always), Loomis is 40 minutes from Sacramento, and Davis is 30 minutes in the opposite direction. I did a lot of driving today. Three types of therapies again. My pup will get better.

("But tell them what happened to me!")

Chou Chou likes to look in trash baskets. At U.C. Davis, sometimes there are wrappers from the treats in there. ("I like to nibble on those tasty wrappers!") Today she encountered a new kind of trash can: it was "touchless." Chou bent over to look at it, which set off the motion detector and popped up the lid. ("It hit my nose! Very ouchy!")