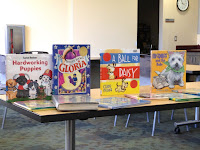 So what's next for Chou Chou? Maybe some volunteer work with children in the library.


I've started the process of certifying Chou as a Therapy Dog. So in addition to going for her own physical therapy, she would be offering help to others.

We could go to nursing homes or hospitals, but right now I am thinking of programs in schools and libraries; children sit and read "to the dogs." Little kids are drawn to Chou and want to pet her and talk about her, and with my experience as a child psychology professor, I think we'd make a good library team.

There are several programs that issue certifications -- and not just for dogs; cats can be therapy animals and even rabbits. There is paperwork to submit: a membership application, and detailed evaluations from her veterinarian and dog trainer.

My first assignment was to make a shadow visit, without Chou Chou, to watch the teams at one of the libraries. Today I went to the Rocklin Library. There were 3 teams (3 dogs and their people). The dogs were large, medium and small, but that was just by chance. There was a reading room, and the dogs lay down on blankets while children came in, chose books, and sat on the floor to read to the dogs. The human team members, called handlers (the dogs' owners), helped the children with difficult words if they stumbled.

The Children's Librarian had chosen books about dogs and featured them on 2 tables in the reading room, although the children were free to bring in any books they wanted to read. The dogs weren't fussy about what stories they heard and two of them fell asleep. The reading program lasted one hour.


I don't know how old the 3 dogs were, but it surprised me that they never tried to interact with each other. Will Chou be able to do this? When she went to dog training classes, or handling classes, she wanted to play with the other dogs rather than pay attention. Even waiting in a veterinary office, she gets into her puppy bow and tries to engage the other dogs in play. But, she did earn her AKC Canine Good Citizen title last year, so I think she can do this.

The next step is attending the monthly meeting with Chou Chou (and the other teams with their dogs). Then there will be an orientation for new teams in June, and a formal evaluation later this summer. What could be more fun than volunteering in the community and being able to take Chou along?