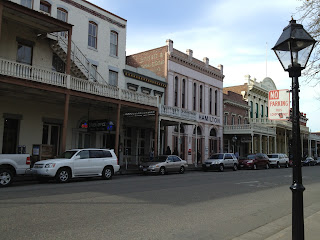 It was overcast today, but no rain, so I took Chou Chou to Old Sacramento. It's an historic area, not far from my home, and it's a wonderful place to socialize a puppy, walking through crowds.

There are men, women and children of all ages and ethnicities; some are in strollers, wheelchairs or leaning on canes; groups of teenagers gathered along the sidewalks in front of the shops. People running, walking, or eating at tables outside the ice cream stores; people with hats, lugging bags of souvenirs.

(There were a lot of people there - really! - but I took the photos when the street was clear.)

They noticed Chou Chou and smiled; it's wonderful having a dog who brightens people's spirits. Chou weaved quickly with me through the people, heeling nicely, but often we were asked to stop so people could ask about her, pet her, or take pictures. She cuddled up to anyone who put a hand out to touch her.

There are horse-drawn carriages; Chou is not afraid of horses, but we were asked to keep our distance, because some horses are afraid of dogs. 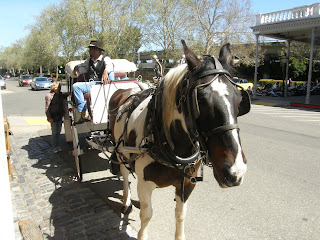 And so many noises! The wagons and horse hooves clacking on the cobblestones, roaring motorcycles, cars, two fire engines, a train whistle, a police siren in the distance. A woman sang at one of the street corners, and a drummer played at another corner. Chou Chou was unsure of the drum, but we walked past it and she only flinched a little.

What scared her, of all the sights and sounds, was the clown. As you can see, there was a lot going on with this clown! She was blowing up balloons, and as she twisted them, they made a sound that Chou Chou didn't like; my pup backed away, hiding behind me. But I stood there for a little while, until Chou got more comfortable. 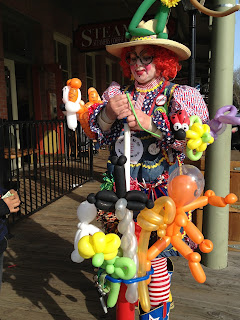 Chou was getting thirsty (and so was I), so after a 45 minute roundabout walk through the streets of Old Town, we headed back to the car and home.

Not long after we walked in the door, Mary called. It was time for Toffee and Chou to play.