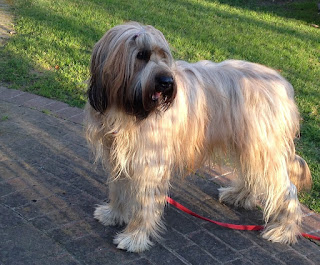 The dog walker took Chou Chou for her 45 minute walk, two and a half times around the park. Janet said Chou kept veering off the sidewalk, pulling her over to the "shortcut" paths that go through the park.


She thought Chou Chou had learned that from me; but no, we've never taken the shortcuts, always all the way around on the sidewalk.
("I expected she'd fall for that...  maybe next time!")

A second puppy expectation:
She was resting on her bed, a room away from me, when she heard Tinsel barking and ran in to find him. ("I heard him, right in my house! Playtime!") But it was only me with my computer, watching the video of her playing with Tinsel. She watched the screen, trying to figure out what was going on. She also came running when she heard her vet's voice in one of the other videos. ("Those flat people and dogs can't play? So disappointing!")


Another assumption and disappointment:

I took her to get her eyes tested. She sat quietly for a few minutes in the waiting room, watching a small dog nearby. 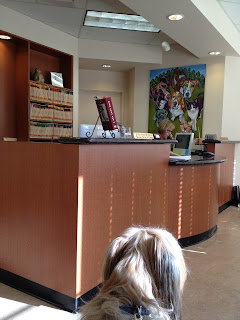 Then she looked over at the counter. 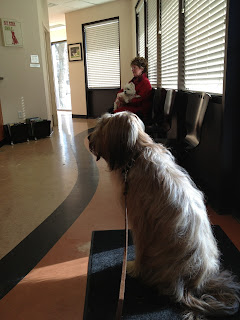 Chou Chou yanked the leash out of my hand, darted to the counter and jumped up, looking for something. ("The bowl of treats!") She's been jumping up on counters at the vet reception area, the treadmill room, the self-serve dog bath, the pet store checkout, and the cleaners, and has been rewarded with bowls of treats to steal. ("Why wait to be handed one little bitty cookie when I can gobble the whole bowl of them before someone notices?")

She ran her big paws along the top. Now look at this picture of the same counter. Notice anything different? She knocked everything off the shelf, searching. ("No bowl of treats? Really?") 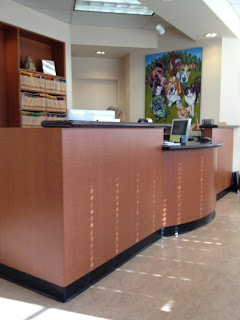 And so Chou Chou learned that not all counters have dog treat bowls on top of them.  ("That's so sad!")