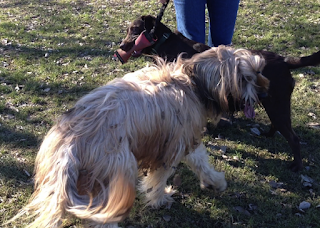 It's supposed to be rainy season here, but every day has been beautiful lately. So Chou went back to the schoolyard for some running and bouncing time with her playmate. As the puppies played, a boy came up to us on a skateboard.

He was 7 years old. "Hi, Toffee!" Mary said she's seen him before, once or twice. We introduced him to "Chou Chou, Toffee's girlfriend." "Hi, Chou Chou!"

The puppies were doing their usual wrestling and pouncing on each other, tails wagging, with Chou sounding a playful squeal now and then. As they rolled on the ground, mouthing each other and pawing, the boy remarked, "Wow! That's a rough date!"

The pups continued, ignoring their young onlooker. Chou was covered with leaves. Toffee batted Chou with his paw. The boy added more commentary. "Don't do that, Toffee! You can't hit a girl or you'll get arrested!"

Defending her Toffee, Mary whispered to me, "Well, Chou started it." Call the puppy police! Charge them both with assault and battery. ("Ha! Watch me charm my way out of that!")