When Chou Chou is in the underwater treadmill, to keep her forward in the tank so her strides are long, she is handed a constant supply of small pieces of treats, one by one. That's why she loves the treadmill and rushes into the tank as soon as we get in the front door.

She runs for half an hour or more, then the water drains out, the chlorine is hosed off, and she comes out to get towel-dried. Energized, she races around the room, bounces off her physical therapy vet (and pulls on the ties of her scrub pants -- uh, oh!), and then we go home.

Today she ran almost 2 miles, sloshing through the water in the tank, which is like 6 miles on land. Then as always, the water drained out, the chlorine was hosed off her hair ... but wait! All of a sudden, she stood up in the treadmill and reached over the top to the shelf that held the bags and bowl of treats, and quickly started eating them before we got them away from her. 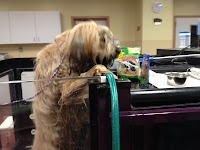 ("The little cookies stop when the water goes out. But I was still hungry!")

Did she know this wasn't good behavior? Doesn't she look like she's been caught in the act? 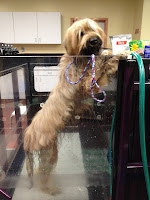 ("No, no! The treats were good! I wondered why you took them away!")

Her experience at the cleaners -- standing up on the counter and being given treats -- has generalized. At least she doesn't counter surf at home.

But, nice hip extension! The physical therapist rewarded that with a few more treats.  I got her out, toweled her off, and we left.

We went back to the lobby, where I stopped at the reception desk to reserve a few more appointments. I felt a tug on the leash, behind me. I looked over my shoulder...

Chou was standing up on the pharmacy counter. ("I saw a big bowl of treats!") And the surprised and amused pharmacy student rewarded the pup's efforts. 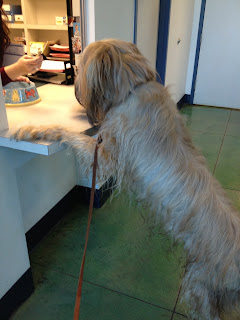 I pulled her down, tugged to get her out the door to go home, but she tugged harder and pulled right back to the counter, and up again for another treat. "One for the road," the student said.

So much junk food! ("Junk food?? No, no! It was tasty, yummy food!") Later, I reduced her dinner accordingly. ("Watch me steal your poppy seed crackers from the counter!")