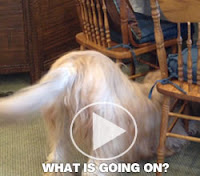 I had some new pants I wanted shorter, so I turned to Couture Designs, to see my friend Kim and her little dog, Tinsel. Chou Chou came along to play. The two dogs met in a Tricks puppy training class last year.


As it happened, they were the only two dogs in the class. Chou Chou wanted to play every week, but Tinsel was afraid of her. You can't blame little Tinsel -- from his perspective it must have seemed like Chou wanted to eat him. So Chou stayed at one end of the training area and Tinsel felt safe at the other end. 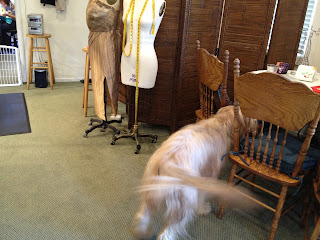 But Tinsel is a little braver on his home turf. And when he feels insecure, he has lots of places to hide. The two dogs ran around for awhile, then Tinsel wanted a break; he hid under the table. Very smart little pup: he knew Chou Chou couldn't follow him there. But his hiding and barking did not deter Chou from trying to play, happily wagging her tail.

Meanwhile, Kim pinned my pants to shorten them, and by the end of my visit, Tinsel came out of hiding. It's good socialization for both the pups to play with dogs of different sizes. ("Tinsel is my cute little furiend -- he really likes me! We will play again next time!")