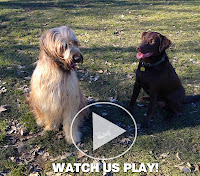 Martin Luther King, Jr. Day, a national holiday. The kids have a day off from school. The puppies can play! Chou Chou met Toffee last summer, while playing in the schoolyard around the corner from my home. They are a month apart in age, still puppies and still very playful.

Toffee, a field lab, is toy oriented. Chou Chou doesn't want the toy -- she wants to herd and wrestle with him -- but Toff doesn't know that. When Chou runs toward him, he runs to protect his toy. And so they get good exercise running. Then Toffee gets bored with the toy and wants to wrestle, too. 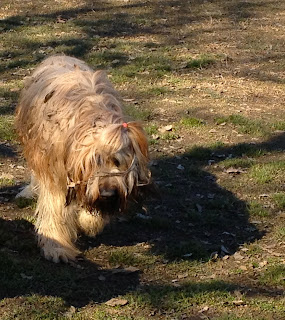 Today the two friends arranged to meet with their parents (that would be Mary and me) at the school, late morning on a sunny day. They ran, they wrestled, they rolled around and Chou Chou got covered with leaves and sticks stuck to her hair. What a mess. ("No, no mess! It's camouflage! I am hiding.")

They are well-matched ("He's my BFF, so I let him win sometimes."), and when one or the other has had enough, the playmates separate, take a short rest, then begin again.