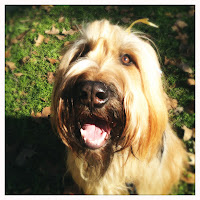 The Charming Mlle Chou Chou is a flirt. I don't know any word that would describe better how she draws people to her.


For example: At physical therapy at U.C. Davis, we wait in the very large waiting room for our turn at the underwater treadmill. Chou wants to play with the other people sitting and waiting, and with every dog there, but almost all of the dogs are there because they are ill. The golden retriever had no interest in her. 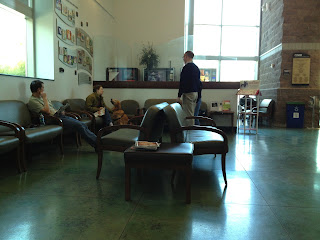 New play prospects came in. A little dog with a cast on his leg did not want to play! Chou Chou went into her puppy bow, but that didn't impress the little dog. So then she barked to say, "Let's play!" ("Oui!") When little dog still didn't respond, Chou pulled towards the poor pup. I had wrapped her leash around the arm of my chair to hold her back .... that wasn't working ... I was moving, in my chair, across the room with her. ("I can pull a wagon, if you'd like!")

The little dog's doctor came out to fetch him and they left the room. Chou was not discouraged; she tried to start a play session with a couple who had a pet carrier on the seat next to them. They thought she was funny, but did not want to play. ("Cat people!")  But then, in came a man, alone, with a beard. Chou loves men with beards, I think because of her happy time swimming in the pool with my bearded friend last August.  The man sat, across the room.

Chou stood and stared at him. He smiled at her, nodding his head. So she went into puppy play bow, waggling her tail. She was flirting. Were those dark eyelashes batting at him? ("Whatever works!") And it worked; he came over to play with her. She pawed, she wagged and wiggled, she jumped up in happy leaps. They were having so much fun.

Then the man with the small carrier, watching, said, "I have never seen such an energetic puppy!" I laughed and told him, "She's here for physical therapy!"
"Really? She needs more energy??"
We all laughed so hard.

Chou Chou's physical therapy vet came out to get her. I dropped the leash, relieved to be free of control, as the vet took over. Oh, happy puppy, leaping all the way to the treadmill room! A few days ago, Chou Chou went with me to San Francisco for another visit with her special admirer, Sebastien, at Joseph Cozza Salon.  She put on her usual charm.

Sebastien bent down to talk to her at her level, and she automatically offered her paw to shake. But Sebastien is French, so he did not shake it: he pretend-kissed her paw.  ("Au contraire! It was a real kiss!")

How cute is that? I wish I had a photo! Sometimes life happens when you don't expect it and don't have the iPhone out.