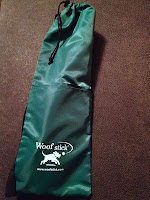 Chou's friend, Toffee, had a new toy to show us. It's like a cat toy, only much bigger -- a WoofStick. Other versions are known as flirt poles.

When the 2 metal pipes are fit together, with rope and toy dangling, it looks like a fishing pole with a lure, except the dog is not supposed to catch it.

If the dangling toy does get caught, a Velcro fastener releases it from the line. From there, it's up to good training to get it back from the pup! I ordered one for Chou Chou. ("If Toffee has it, I want one, too!")

It arrived yesterday, and Chou seems to enjoy it. It's good exercise when she is not motivated to fetch a ball. I first tried it indoors -- big mistake in a small room. Picture a swinging metal pole, a toy on a long rope flying over counter tops, a puppy leaping, and me in the middle. That belongs in the "What was I thinking?" category of behaviors, never to be repeated. Outside is better, now that I've learned some coordination (how not to hit my head when I swing the pipe).

I brought it to U.C. Davis today, to see what the physical therapist thinks of it; she said it's good for the pup's hips to reach for the lure. I took a video while she played with Chou.

Then, underwater treadmill. ("And then, home for a nap!")

I'm sure my sheltie pup would love one of these!