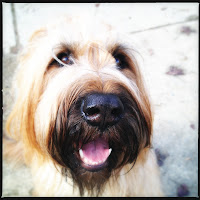 Thankfully, Chou Chou has recovered from her setback and is back to bouncy pouncy puppy play. ("More Woof Stick!")

She received two big packages today. The first was dog food. The second box was a crate mat.

When my first briard, Mimi, could no longer climb up the stairs two years ago, I moved my computer downstairs, to work at the kitchen table so she could be with me. After she died, I stayed in the kitchen and bought a bed for Chou, to rest by the table while I work, read the newspaper or eat. But it was time to move the computer back upstairs to my desk and  comfortable chair.

Chou Chou's big bolster bed, in my bedroom, is just a few feet from my office bedroom, but I thought she might like to hang out with me in here. She follows me from room to room. ("I am a good herding puppy!") 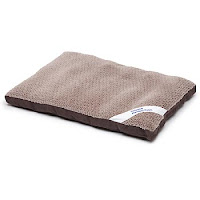 So I bought her a simple crate pad a couple weeks ago and put it next to my desk. She walked on it, and walked away; she didn't like it. ("Too small!") I returned it. 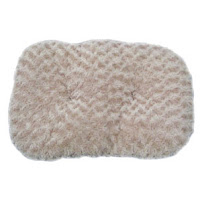 Then I bought a very padded mat with a white faux fur top. It was lovely, but Chou Chou wouldn't lay on it; she just crouched. ("Too fluffy and too square!") I returned it. 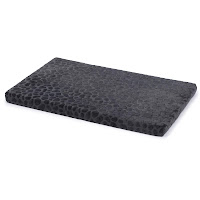 Third try: a memory foam crate pad, like her Orvis bed, although much thinner. She crouched; she left. ("Too flat and too hard!")

I was going to give up -- maybe she just didn't want to be in this room? But, one more try, I ordered a thick pad from the Internet. This one would be more difficult to return, and it cost more than the others. I like it a lot. It looks like a vintage fabric cover, which goes with my antique desk and chair.

She got on, crouched.... and then she sat. She squirmed for a few minutes, then lay down, stretched out and sighed. And there she stayed. It was just right!  ("Okay, I'm going back to my real bed now. See you later.")