A Day in San Francisco 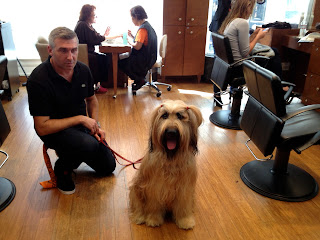 I took Chou with me to the salon again today. Much better than leaving her home alone all that time. This time we went to the second location of the Joseph Cozza Salon, on Maiden Lane.


I may be holding the end of the leash at the salon (in the photo, Sebastien is holding the leash), but she is busy greeting whomever she sees. They all seem to be dog lovers (she was invited by the salon). Stylists and salon clients flock to her -- to talk, touch, and take photos of her to show their friends.

One client said to her colorist, "I'd like my hair that color!" (pointing to Chou). She sounded serious, but I don't know.

While my head was over a bowl getting my hair rinsed, I heard the woman next to me, also with her head tilted back, startle, "Oh!" Chou Chou had put her head in the woman's lap. I pulled Chou away. "It's okay," she told me, "now that I see what it is!"

While I was immobilized under a hair dryer, Chou was stretched to the end of the leash to see what the woman across from me had in her coffee cup. ("I was thirsty!") So someone brought her a small bowl of water ... and a towel to wipe her mouth.

And while I was getting dressed to leave, putting on my sweater in a curtained changing area, Chou Chou was pulling past the curtain to see some women on the other side -- and pulling me out, partially undressed, with her!

I decided to have some fun and put some foils in Chou's hair, as if she were getting her hair highlighted. The stylists thought it was very funny. But a couple of the salon clients gave me a funny look; I told them it was a joke, and then they laughed. They imagined an obsessed dog owner taking her dog to a salon for hair color; there probably are dog owners, somewhere, who do.

Chou is a handful! I was very tired when we got home. If the salon was close to my home, I would leave her home. But with rush hour traffic at a standstill coming back, I was away for nearly 7 hours. Better for her to come with me. And people enjoy her ("Oui! I am cute. And I love adventures!") 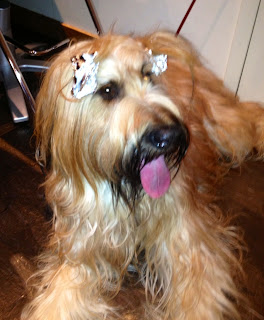