Chou Chou is taking another class with Ben at PetSmart: Tricks.


From the beginning, I taught Chou Chou basic tricks and commands: sit; wave hi; give me paw/shake; other paw/shake; down; stay; stand; go to place; go to bed; wait; leave it; go get it; okay.

During tricks class, she's learned to "read" 3 words: sit, down, and stay. She learned to weave around objects, take a bow, and (from her little classmate, Tinsel) she learned to spin. Today she practiced being shot (Bang!), and she readily ran through an AKC tunnel several times. Then she took her bow.

We practiced something new to her, the Shell Game. There are 3 cups, and one has a treat under it. Ben showed Chou the treat going under one of the 3 cups, and then he mixed them up. She put her paw on the correct cup and got the treat. He did this several times. I watched her head moving around as the cup quickly changed positions; it looked like she'd get dizzy.

Ben called over another trainer to watch. He'd never seen a dog do that before: she wasn't picking the right cup by smell; she was moving her head in sync, carefully keeping her eyes on the cup with the treat as he shuffled it around the other 2 cups, no matter how he moved it around, and she put her paw on that cup when it stopped, earning the treat.

I couldn't do that - he moved the cups too fast for me to keep track of it. So how does it feel to have a dog who is smarter than me? A bit odd. ("Now we go to Vegas!")

And she earned another graduation certificate. Well done, Puppy! 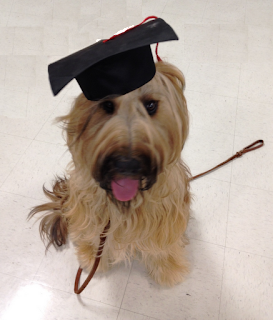