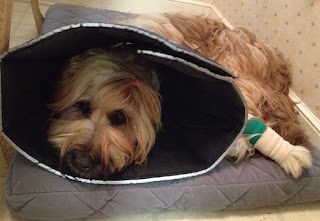 No playtime with her friends tonight.


Chou was running in the yard  and when she came into the house, I noticed some blood on the floor wherever she was stepping.

Unlike many dogs, Chou doesn't get angry or protective when I examine her paws. I brush them almost every night, so she is accustomed to being touched around her toes and between her pads.

A front dewclaw nail had been almost entirely ripped off. It was barely hanging on. I cleansed it, then took her to the vet. The nail was broken right down to the bone, and could not be saved; she would have to have the rest of it removed, too -- but with anesthesia. Then they wrapped it up and sent us home with a big plastic lampshade to use in the car (you've seen those clear plastic collars, right?), so she wouldn't chew on the bandages.

If you have dogs of other breeds, you might wonder why her dewclaws weren't removed. Briards have a different kind of dewclaw: They are not empty nails; they are fully functioning toes. These extra toes help briards "turn on a dime" when herding sheep. You wouldn't remove one of your toes, right? You use all of them for your stability; likewise, briard dewclaws are never removed. Briards have one on each front paw and two on each back paw. It is a breed standard.

Chou's litter mate in San Francisco was born with only one dewclaw on a back paw, so her owners knew beforehand that she could not be a show dog. Shows are not beauty contests; the dogs have to be healthy and structurally sound, able to perform the tasks that the breed was meant to do.

When we got home, I switched from the hard plastic to this padded cone. It had belonged to Mimi; I didn't keep many of Mimi's things after she died, but for some reason the cone was still here. Then I went online and ordered a clean new Comfy Cone of Chou Chou's own.

The cone is soft when she puts her head down, and the advantage for me is that when she bumps me -- and she always does -- this cone is flexible and doesn't jab me like the plastic lampshade. ("For me, doesn't matter which cone! Do I look happy to you?)