A Good Idea, But Not Working 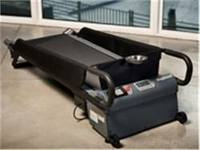 In May, I bought a dog treadmill for Chou Chou. Back then, I had no idea that she would need physical therapy.


I bought it because she's a herding dog and needs a lot of exercise. And a tired puppy is a good puppy, less likely to jump on people for her entertainment.

Playing with other dogs and taking fast-paced, long walks with the dog walker -- and fast-paced but shorter walks with me -- are very good for her, but Sacramento gets very hot for months at a time, and then it gets rainy for months at a time. I wanted the treadmill to exercise her when she can't go out to run. I bought a dog treadmill rather than a human treadmill because she needs room for long strides; human versions are too short.

When the treadmill arrived, I started putting treats on it so she wouldn't be afraid. She will get on. But she doesn't like it. At first, she sat and remained seated when it moved; when she rode to the end, I shut it off. For other dogs, maybe falling off the back end of the treadmill would be a good lesson to keep moving. But the treadmill is so long that it runs the length of the room, so she would bump into the wall, maybe get caught underneath the machine. I couldn't risk that. ("Lucky for me!") And with what I know now, the HD, it would not be wise to have her fall off and hit her hips.

She's doing better with it now, but not good enough to get useful exercise. It turned out to be a two person job: one to hold the leash guiding her forward, and another to stand in front and give treats. I've tried it with the dog walker, but that's not practical because of the dog walker's fee. And although Chou walks on it now, she jumps off after a minute or so.

The videos online show happy dogs running on their treadmills without their humans holding a leash or giving treats. Well, maybe some dogs, but not my Chou Chou. So I stopped training treadmill for a while.

Today Chou Chou started physical therapy to help her hips -- underwater treadmill, to lengthen her stride and for exercise. I was hopeful that successfully using the underwater treadmill (she couldn't jump out of the tank, after all) would generalize to my home treadmill. What happened was unexpected: she sat. The home experience generalized to the PT, and not the other way around.

This is discouraging. Underwater treadmill would be so beneficial. I saw how helpful it was for Mimi, when she was old and weak after hospitalizations. But Chou is not Mimi, and it's unfair to compare.

I am not giving up. We will try again next week.