I arranged to have Chou Chou entered in this show circuit. It would not be like Pomona.

She would be handled by Mike, and I felt good about it. She knew him well from the classes, and I trusted him completely. He did a great job as her handler for the Cal Expo Sacramento show.

I could not afford to fly down there, like I did for Pomona. I asked around for a ride, tried to find someone else who was going, but no one was. So Chou would be on her own. I would hear how she did when Mike called me at the end of each day.

He had to be there a few days before Chou was entered, and he wanted to avoid July 4 traffic. So I washed her, combed her, and dropped her off on Tuesday evening.

I continued to try to find a ride to Southern California, but my friends were not going to this show. I called Amtrak and learned that from the California state capital to Ventura, all that was available is a train connecting with two buses. To me, that's crazy; I am accustomed to good public transportation back East -- fast Amtrak trains, subways, buses - but here, Californians like their cars. The longest time I have driven is 3 hours; driving is tedious to me. So I was resigned to staying in Sacramento and getting the phone reports about the show.

I missed Chou Chou. I've been worried about what her hip x-rays will show on Thursday, so I wanted to see her; and I didn't want to miss her show. By Thursday night, I was considering driving down. I checked the Internet for hotels, wavered, looked and wavered. At midnight, I found a good price on a hotel in Ventura that will take dogs, and I booked the room. Then I was committed to the drive. The pet sitter was available to watch Brandy the cockatoo.

Next morning, I actually did drive to Ventura. I am proud of myself. It took 6 hours.  I reunited with Chou.

Chou Chou was happy at the three day dog show, very relaxed, and the handler had her looking beautiful. She took walks with me along the concrete "boardwalk" overlooking the ocean. I love the ocean. I grew up on the Jersey Shore.

We ate well. She was with the handler in the mornings, so I walked around the show, went to the vendors and bought too many dog things, and had lunch on my own. For dinner, there were lots of restaurants that let dogs eat outside with their people. ("The salmon you dropped was trés bon!")

So different from the Pomona trip! We were having fun. And she slept peacefully on the motel bed ... 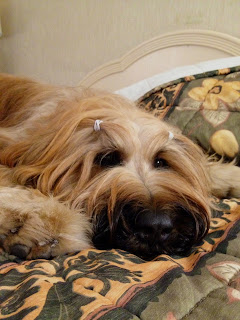 ... except that Saturday in the middle of the night, I was awakened by a loud thump, looked to see no pup on the bed. She fell off in her sleep ("Oops, ouch!"), but she got right back up again, spread out, and instantly fell asleep. One thing that was funny: the handler had several Malamutes with him. Chou was crated near them at his setup. And she started to make odd noises ... she was imitating the Malamutes, with howling, talking sounds. ("If I talk like the big guys, they won't eat me.")

Sometimes Mike showed her, and sometimes his son took over. She was competing with the same black imported French girl as in Pomona, where she beat her twice and lost to her twice.

This time, Chou lost to her all 3 days. Two women who owned briards but did not have dogs entered in Ventura came over to watch Chou and talk to me each day; they kept looking at the other dog, they said, and wondering why Chou Chou wasn't winning First place (I wondered, too).

Each day Chou got Second Place ribbons. She also got something called Winners Reserve -- runner-up to the winner out of all 4 of the briards in the show; so she beat 2 dogs. No points. After the last competition, I asked the handler why Chou wasn't taking First place.

He was honest, and told me he could not show her anymore; it would not be worth my money: she has a beautiful coat, beautiful color, strong head, nice shape ... if only she were just judged while stationary... but dogs are not judged stationary. They have to move right.

And Chou wasn't moving right. That was holding her back, her stride was wrong. He thinks her hips might be causing a gait issue; she is not pushing off on her hind legs enough. Mike is a very nice guy and he felt bad telling me this. I told him Chou Chou was scheduled for hip x-rays when we got home.

I don't know what the x-rays will show. Maybe nothing. Or maybe an injury that can be corrected. I am worried. It's like finding out your kid may have a disability, worrying about what that means for the future; will she be in pain?

I am okay with this possible end of showing her, sometimes. Other times I am sad. What I like about the shows is not the competition; I've enjoyed walking around the shows with Chou and talking to the other dog lovers, and seeing the different breeds. I can still go to the shows and do that.

The trip home took 9.5 hours! The car's navigator steered me south and then back up to Ventura! Then the little Mini Cooper had trouble getting over the mountain range. And I-5 was under construction and down to one lane for 35 miles. It took me  an hour just to go 5 miles in Bakersfield! The air conditioning was having trouble cooling the car in the stop and go traffic and up the mountain, and it was 105 degrees outside.

I saw an exit with a restaurant and thought I should take it. At the rate we were going, who knows when I would have another chance for a rest stop? Only trouble was, I realized I could not go into the restaurant with a dog.

I saw a Vagabond Inn next to the restaurant; I asked the woman at the front desk if I could use a restroom and get some water for my puppy. She said no; I would have to take a room for $54. I looked across the road at I-5, cars still weren't moving, it was 105 degrees ... I took the room.

For 45 minutes, I blasted the air conditioner until we were both cool. Chou got water and so did I, I used the bathroom, and Chou found some grass for a potty break, we had some snacks, and then back in the car and back on the freeway. That was the most expensive bathroom break I've ever had! But it was the healthiest thing to do; I had been worried that Chou would start to overheat in the car. When we started out again, it was early evening, a little cooler.

That was a terrible car ride. But Chou was great in the car, sound asleep across the backseat. At one point I actually looked back to make sure I didn't leave her at the motel!

I am very glad I went to see this show, as it may be her last. I have a beautiful briard who maybe runs off-kilter. She lumbers when she should stride. Not a winning mover perhaps, but ... I think it's cute.