Mixed Feelings at the Pomona Circuit 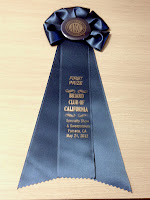 Each day of a show is actually a different show. The entirety is called a circuit. For Pomona, there was the Briard Specialty the first day and then the weekend shows.
I flew to Pomona and checked into the hotel that was closest to the fairgrounds and where the handler was staying, the Sheraton. I brought her brushes, her food and bowls, long leashes for walking and short show leads, and toys. I would keep her with me each night.

I hung out in the hotel lobby, anxiously waiting for Chou to arrive. The handler and entourage didn't arrive until quite late. When she was handed over to me, I was shocked at her condition.

When I left her with the handler, she was perfectly groomed; but now her paws were covered with burrs/stickers and she was panting heavily, pacing the hotel room, extremely agitated after the 8 hour trip ("Bumpy. Strange dogs. You were gone! Can we go home now?"). First thing I had to do was brush, pull and cut the stickers out from between the pads of her paws; they must have been painful to walk on ("Oui! Very ouchy!").

She refused to eat, and paced or sat in front of the door until 3 a.m. Every time I looked over at her, she was sitting up, alert. I was unable to comfort her. Maybe this trip wasn't such a good idea.

I met up with my friends and their briards in the morning  and gave Chou back to the handler, for the briard specialty. Unlike the Sacramento show, this time Chou Chou had competition, and she won first in her class. What a beautiful big, blue ribbon! ("If the ribbons aren't tasty, and they don't squeak, I don't care what size they are.")

She did not win at the next level -- she "put on the brakes"  and did not want to move forward -- so there were no points. I have never experienced Chou to be reluctant to run in the ring. Something was wrong.

Afterwards, Chou Chou stayed with me for the day and played with my friends' briards. There was a luncheon for the briarders, and I won a raffle. I put in only $10 and won a lot of cool stuff; this is only part of what I won. 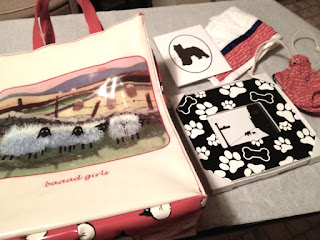 Chou stayed in the hotel room with me again that night (we changed to a cheaper hotel, where my friends were staying), but again she was unsettled. My friend came in with one of her briards, Gracie, so Chou Chou could play in the room and maybe calm down. But Gracie was used to sleeping on the family bed, so she immediately jumped up on my bed. Chou has never jumped up on anything ("It's too ouchy."), and she waited for the pup to come down and play. But the playmate stayed on my bed, so that didn't work. Chou was still unsettled and sleepless.

Well... this was a larger bed than my bed at home ... and it was Motel 6 where dogs are allowed (in fact, the whole hotel was filled with dog show people and dogs) ... so, what the heck ... I invited Chou up on the bed. I placed her front paws up, then lifted the back paws up. I pet her head, stroked her back, and she stretched out and fell soundly asleep in an instant ("Aaahh. So nice!"). When she dreams, she kicks; I did not sleep well.

Next morning, Friday, I delivered her back to the handler's setup area, where she was crated. The handler had a time conflict with one of the other dogs she was showing, so Chou went into the ring with an assistant handler (who was actually pretty good, and liked Chou). 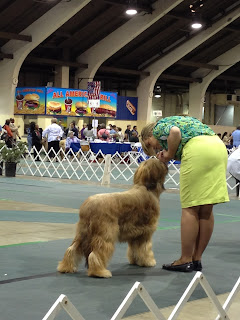 I was disappointed that they did minimal grooming Friday, just washing her feet and beard, while my briard friends were bathing and blow drying their dogs. Chou lost her class Friday and took second place Saturday.

The handler was defensive and blamed me for Chou Chou putting on the brakes and refusing to run with her; she blamed me for a "lack of bonding" with them, because I took Chou with me after her time in the ring and at night. I don't believe that. With the other handler, at the Sacramento show, I dropped Chou off to get groomed and do the show, then took her home until the next day, and she did well; she was not crated at their setup; she walked around with me. If I hadn't had that experience with that handler, I wouldn't have known any better. But, okay, I agreed do it her way and to leave Chou with them except for picking her up at night.

And so Sunday, Chou stayed in a crate at the handler's setup area all day, while my friends' briards were together and playing, being bathed and brushed. The handler said she did not want me anywhere near their setup area, or be near Chou after the ring. That was completely unnecessary, but I complied.

I watched from a distance. The contrast with how the other briards were being pampered and enjoyed while Chou Chou was stuck in a crate and neglected was terrible for me, and I felt sad and guilty that I was putting Chou through this. I saw that she was in the crate until 10 minutes before they brought her ringside; she was not brushed out. Later, the handler said, "We have a lot of dogs and don't have time to groom a briard." She shouldn't have agreed to take Chou Chou if she didn't have time to do anything with her. And I could have bathed her, brushed her, but I wasn't permitted to "interfere."

It was show time. I watched the handler across the hall, eating and talking with friends, while the assistant showed Chou Chou. No conflict, apparently; the handler just didn't choose to do it. Chou won first in her class, even though (as one briard friend put it) she looked unkempt.

Right after her Sunday ring time, I caught the plane home. I hated to leave Chou there! They would not get home until two days later, today.

I was so glad to see her when I picked her up from the handler! We got home, I closed the gate behind me, and just opened the car door -- Chou Chou leaped out and ran and ran and ran around the yard, so happy! She was affectionate, too, and glad to see me. Later we played with her toys in the yard and she ran some more. But much of the day she hung out on her bed in the kitchen when I was downstairs, or in her large bed in my bedroom when I was upstairs. She needs to recuperate! I brushed out all the stickers (more stickers!) from her paws; I don't think a professional handler should return a dog in that condition.

So the Pomona shows are done. Loved the briard specialty, fun with friends, and the first place wins were nice, but I felt awful watching Chou neglected and alone. Other people may like this handler, but she was not right for my puppy. That will not happen again.