Chou Chou broke away from me at handling class. For an hour, she was jumping, pulling, and rolling on her back and kicking when she should have been standing still... and then, with all her twisting, the leash slipped from my hand and she got away from me.


She ran and ran and ran, circling (herding?) around the other 10 dogs and owners. ("Free at last!")

I didn't even try to catch her - she's too fast. Everyone watched for 5 minutes while this Wild Thing flew by, circling us again and again. Then the handler/teacher suggested I go to my car and open the door. That seemed like an odd thing to do, but sure enough, as soon as the door was open, she flew into the back seat. She had had enough of that show collar and standing still. ("Safe at last! I wanted to go home!")

The metal snake chain of the show collar is shearing off her hair. I suspect she was being hurt as it caught in her hair and pulled it. I really think she was fighting me because it was hurting her. Poor show dog. ("Au contraire! I wanted to play, you made me stand still, and enough of that!") 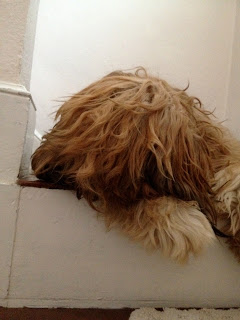