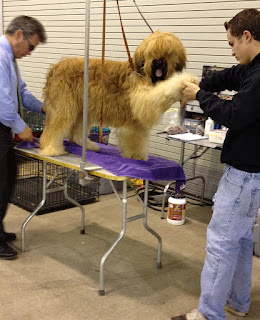 It crossed my mind last week to skip the show. As the only briard, Chou Chou could not earn any points towards a championship. But I went for the experience, and I am so glad I did.


It was great for Chou to be part of all the chaos: diverse people and dogs, moving crates, barking, people shouting,  loudspeakers, pushing crowds, and new ways of being asked to behave. And she was a very good ambassador for her breed. Like yesterday, we were constantly surrounded by people asking about her, wanting to pet her, taking her photo, all smiling at her; she was the perfect petite chou. ("Admiration is good!")

One woman who stopped to talk to me did not find us at random: she had come to the show just to see "the briard." If I had skipped the show, she would have come in vain and we would not have met. Her briard died just 2 months ago, so in sadness, she needed to connect. She is looking for a puppy. I am sending her to the briard listservs. That worked for me when I found Chou Chou!

One hour before my pup's show time, it was time to bring her back to the handler for grooming. When he was done, she looked beautiful! ("I adore being fussed over!")

Chou entered the ring and took 3 ribbons: Best in the 12-18 Month class, Best Female Briard, and Best of Breed. No points, no competition, but the ribbons are real. Judges do not have to award the ribbons, even if there is only one dog in the class. Chou truly won the ribbons.

There is a lot of sitting around and waiting at dog shows. After the briard competition, we waited until it was time to enter Herding Group. No walking around now; every hair had to stay in place. (Being beautiful and popular is so tiring!") 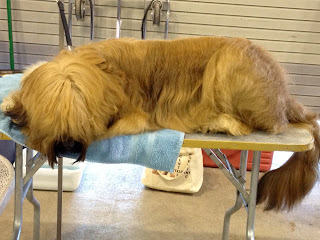 She didn't win Herding; that was a long shot for a puppy. But it was fun to have her represent "The Briard" with the other herding dogs.

I was the proud parent with the camera. As I watched her with the handler, I was amazed that this is the same pup who was pouncing on me and the dog walker, and frightening us, just a few months ago. She earned her CGC last weekend, and she behaved beautifully today, in the ring and out. After all the trainers, obedience classes, and handling classes (plus she's older now), voilà! Sweet puppy!

At the end of the day, I asked the handler to show her tomorrow, too, even though she's the only briard again. And there's a show he will attend in Ventura in July that Chou can enter ... very seductive these dog shows.

After a full day, Chou and I are both tired! But we had a great time today, and we'll be back at the show tomorrow.