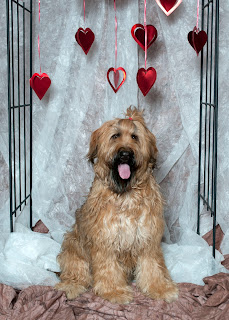 It's Sunday, and we went to a dog park on the grounds of Sacramento County Animal Care, a pet adoption center. Chou Chou was playing with a golden retriever who liked to play fetch. Chou didn't care about the ball, but she runs after any dog who is fetching a ball. She's a herder, not a retriever. Each breed has its speciality.

As I watched her play, I saw a man standing outside the fence and pointing at Chou. "I want that one!" he said. A woman next to him told him that the dogs for adoption were inside, but the dogs playing on the playground already had owners. He persisted, "But I want that brownish one with the long hair!" I went over to him and introduced myself as her owner; and I told him about briards and how he might find one. He was grateful for the information, and I think he may actually look for a briard. But he left a little disappointed that he could not have Chou Chou.

The dog park started to empty out and all the owners and dogs were headed into the building. I was curious, so I followed them. There was a photographer taking pictures of the dogs for Valentine's Day. Chou was dusty after playing and rolling around on the ground -- something she likes to do when she wrestles with other puppies -- and she was panting, but it was $15 so I thought, why not?