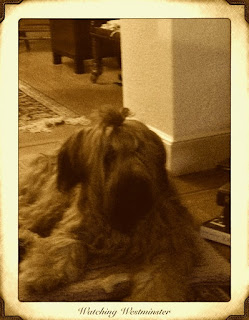 No, she will never be in that show. But she enjoyed watching it.

Chou Chou isn't allowed to go into the living room/dining room area without me. There is a baby gate keeping her out. My harp is safest without a big puppy to knock it over.

And while Chou has never chewed anything of mine, just her toys, the thought of a harp in splinters... best she doesn't go into that room.

But when I watch occasional TV, when she is invited in, I put a soft crate pad on top of the Persian carpet, bring in a couple of her chew toys, and she lays next to me watching a show (or chewing or sleeping).

I thought she might like the Westminster Kennel Club Annual All Breed Dog Show in New York City. She liked the commercials best; the dogs were running and playing in the ads, moving in much more exciting ways than they do with a handler in the ring. ("Who wants to watch a poor pup having to stand still and have her teeth examined?") 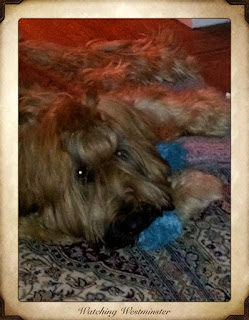