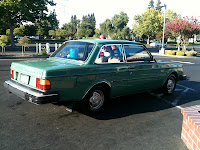 Chou Chou and I went to the far-away-but-best dog park. I took the 2 door, 1979 Volvo that I rarely drive, to keep up the battery. It often makes it to the destination, but I always bring my AAA road service card. So far, Chou Chou hasn't had to ride with the tow truck.
The car made it there. I got out of the car, locked the driver's door, and went around to the other side of the car to get out my purse and Chou.

As the door shut behind me, I saw that the passenger door was locked. In the Mini Cooper, I cannot lock myself out, because it takes a key to lock the door from the outside. But I was locked out of the Volvo -- and Chou Chou was locked in, along with my car key, ID, phone, everything. I looked at Chou through the closed window and felt sick.

I didn't want to, but to get help I had to go away from the car, to find a kind person with a cell phone to call AAA. I looked back to see Chou standing with her face against the window, watching me leave. Terrible. ("You think it was terrible for you? I wanted to get out and play with my friends!")

Yes, I found someone with a phone. But she was suspicion and thoughtful; perhaps she thought this was a trick to steal her phone, so she called for me. AAA said they would rush over and come within the hour -- oh, no! Chou couldn't sit in the closed car for an hour, even on a cool day.

I asked around for a coat hanger. For some reason, no one at the dog park seemed to be carrying a metal coat hanger in their pockets.

I went back to the car - Chou seemed okay. But what to do? Then, moving slowly along the potholed gravel road between the parking lot and the fenced dog park, I saw a pickup truck. I jumped up and down and waved frantically. It stopped.

The 2 men were gardeners, with a lawn mower in their truck, a long bush clipper, and the leaf blower. I explained the situation. After I was done explaining, the two of them continued to look at me politely.

Finally one said, as best he could, "No English." Great. I would have to show them. I pointed to puppy. I pointed to locked car doors. They got it. And would you believe... they had a metal coat hanger! We were saved.

Nope. The windows in the Volvo are tight and the metal hanger could not be wedged in. I was getting panicky. AAA would not be there for a long time.

These men didn't speak English, but they saw the problem and they were smart. I never noticed that the back window -- the little window that pushed out to open -- had a screw in it.

And they had a screwdriver. They carefully removed the window, pulled the door lock up so Chou Chou was free, and then they screwed the window back on.

Now I had my phone and checked the time. She was in the car maybe 10-15 minutes, but it seemed so much longer.

And off we went, into the dog park. And she ran free and far. Then she spotted the white poodle. She loves to wrestle and run with white poodles. If she doesn't have a white poodle to play with, she will settle for other friends, like a little fluffy white dog, or a tan lab (but never a gray or dark poodle). Do white poodles look like sheep? Is this her herding instinct? ("I just think they're cute.")

After a tiring afternoon, we went home.